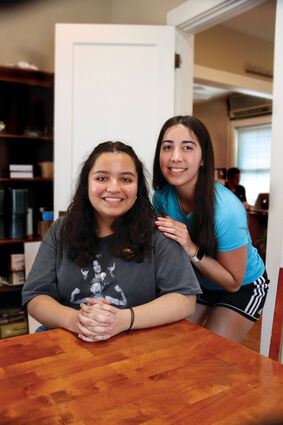 "(East Leyden) is more than 50 percent Latinos," said Olaguez, who is of Mexican heritage. "The transition to Central, I felt, was a big difference."

"I found a lot of kids that had similar backgrounds, so it was easy to connect with people," she related.

Now Olaguez helps lead the club, endeavoring to be a source of supportive fellowship while also promoting cultural understanding and appreciation of Latino culture to the wider student population.

"There are people who were born here but they identify a lot with their Hispanic heritage, and we find common ground in that," she said.

Colombia, Cuba, Puerto Rico and Venezuela are among the Latino cultures represented in the student-run group, under the sponsorship of Central Spanish teacher Bianca Holland. Previously called the Spanish Club, the current moniker was adopted about six years age, Holland said.

"We changed it to show that it is truly an affinity space for all those interested in Hispanic culture," she explained. "Not all of the members are Spanish speaking, but they have a connection to the culture or (Latino) family members. It's a space for them to come together and share what traditions they share."

Veliz-Hernandez found HSA her freshman year when school was largely a series of Zoom meetings due to the pandemic.

"It had been a concern of mine that I was going to have trouble connecting to my peers because it was all virtual," she recalled.

The club got her plugged in in a meaningful way.

"It felt good to talk to people from school and listen to what was happening in other grades and other classes," Veliz-Hernandez said.

Veliz-Hernandez said a former club member alerted her to a Hispanic National Bar Foundation summer program, through which she traveled to Washington D.C. for a week and conducted a mock trial with a federal judge.

"There's a lot of mentorship going on and people sharing opportunities they've taken advantage of for leveling up your skills," she said, adding how seeing club members go on to have post-secondary success is inspiring. "They're doing things they love, and I see myself in them for my future."

Olaguez said she's confronted misconceptions or stereotypes about those of Hispanic heritage at Central. She wants HSA to cultivate understanding.

"It brings the community together to help the ignorance and bring awareness," she said.

For Hispanic Heritage Month, the club has compiled Spanish music, movies and other content that students can access with a QR code. Central's TV monitors have been displaying notable figures in Latino history, and a special schoolwide celebration is being planned for early next month.

Olaguez said inclusion is the goal.

"If you're interested in the culture and just want to learn more about it, you're more than welcome to join."