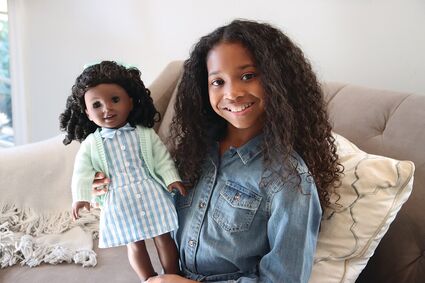 The American Girl website describes their newest doll, Claudie Wells, as "most likely to have five college majors." That's just one thing that Claudie has in common with Rio Lewis, the Hinsdale girl chosen as Claudie's real-life model.

The ambitious 11-year-old said she plans to attend Julliard before embarking on a career that will involve movies, television and Broadway. She also wants to be an animal rights activist, and one day open her own school to teach others about the arts.

"Then, I'm going to be the president," the Hinsdale Middle School sixth-grader said.

A model since age 4, Rio enjoyed success as an actress, dancer and model even before landing her "bucket list" job with American Girl last year. She and her mother, Didi, agreed they didn't really know what the job entailed until they saw Rio's picture not only on book covers but on billboards, advertisements and signs promoting Claudie and her story.

Claudie is fulfilling more than one dream for Rio, who didn't need a teaching degree to inspire young people to read. As Claudie, Rio hopes she will help to ignite a lifelong love of reading in children who read Claudie's story.

"It's really exciting that they might learn to love reading," said Rio, who knows from experience that a single book can turn a reluctant reader into an avid one. Before picking up the first in the "Keeper of the Lost Cities" series, Rio said she had little interest in books. Now, she reads as much as she can.

Rio also is promoting reading via Kellogg's cereal boxes, where her image appears with the iconic Tony the Tiger. The boxes are part of the company's "Feeding Reading" campaign, which provides a book with the purchase of a qualifying Kellogg's product.

A singer and dancer as well as an actress and model, Rio recently was offered a role on the national tour of "Annie."

"I passed on it because I was really excited to start at HMS," Rio said.

Already showbiz's definition of a "triple threat," Rio is adding musician to her list of abilities as she learns to play the trumpet. Rio said she decided on trumpet while portraying Claudie, who also plays. It was during a photo shoot that she held the instrument and played her first notes, igniting a desire to learn more.

Claudie is not the first black American Girl character, but Rio said she is the first black character with a positive backstory. While Addie escaped slavery and Melodie endured the civil rights movement, Claudie is simply a girl with ambition, growing up in New York during the Harlem Renaissance of the 1920s. Black artistry surrounds her, which inspires Claudie to explore her own talents and how to share them.

Rio said she hopes Claudie will inspire others to find their talents and follow their dreams, just as Rio does every time she performs.

"I want to inspire them to dream big," she said.

Halloween is still a few weeks away, but Rio already knows what her costume will be.

And as children everywhere are introduced to Claudie's story, Rio hopes she won't be the only one.