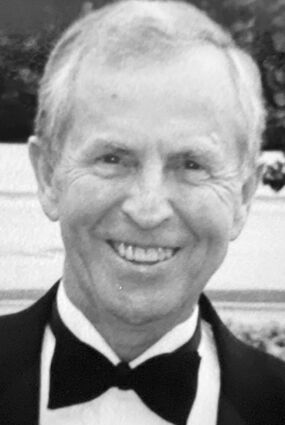 Lou was born in 1928 in Philadelphia, the son of Louis and Alyce Rutherford Umsted. He was educated in Philadelphia and moved to Seattle, graduating from the University of Washington with a degree in business. He participated and lettered in several sports and was president of his fraternity, Alpha Delta Phi.

In 1951, Lou reported to Pensacola, Fla., to earn his Navy wings. He flew a Cougar fighter jet as a member of the Pacemaker fighter squadron on the USS Boxer aircraft carrier during the Korean conflict. Lou met and married Peggy Hatmaker in Palo Alto, Calif. in 1955. In 1967 the couple settled in Hinsdale, where they lived for 30 years.

Lou worked for Chicago-based National Can and enjoyed a 30-year career, retiring as executive vice president of sales and a board member. Lou and Peggy retired to The Landings in Savannah and The Marshes on Skidaway Island.

Lou joined several boards after retirement, including Barry-Wehmiller and King-Bruwaert House. He had a strong Christian faith and loved the Lord. He enjoyed tennis and golf at the Hinsdale Golf Club and The Landings. He had a passion for woodworking and built many family heirlooms, along with hundreds of bluebird houses that are placed throughout the golf courses of The Landings.

The impact and legacy that Lou created for the Umsted family will be cherished and honored for many generations. Lou always laughed and was a happy man with a happy family.

He was preceded in death by his wife of 67 years, Peggy.