Career change gives Rotarian time to give back 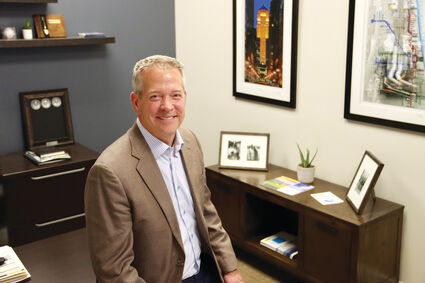 MARK WANLESS Financial adviser at Edward Jones, Hinsdale • Played football in college • Earned his MBA from University of Illinois in 2001 • Traveled to Greece with his family this summer

A sermon delivered in church one Sunday stuck with Mark Wanless for years. The message was about the importance of volunteering one's time, when and if that time becomes available. As the father of four saw his children begin to make their way through high school and on to college, he found himself with time to give to his community through his involvement in the Rotary Club of Hinsdale.

"Rotary is an organization I've always been intrigued with," said Wanless, a resident of Western Springs who joined the local branch of the worldwide organization soon after taking over the Edward Jones Hinsdale office in 2020. It wasn't long before Wanless wasn't just a member of the group, but chair of its biggest fundraising event, the Rotary Run Charity Classic.

Now in its 28th year, the Rotary Run Charity Classic attracts hundreds of runners, from first-timers to seasoned athletes, to the streets of Hinsdale each October. (See Page 32 for registration information.) The event, which starts and ends at The Community House, includes 3K and 5K walks; 3K, 5K and 10K runs; as well as

"It's basically a 3K walk with your dog," Wanless said.

This year's event also includes the return of the mascot race, a short dash involving the costumed characters from all nine Community Consolidated Elementary District 181 schools. Oak School's Hootie will defend its reign as race champion when the mascot race steps off at 9:45 a.m.

Traditionally held on the first Sunday of October, Wanless said the Rotary Run serves as a fun family outing for some, while others use the event as a warmup for the Chicago marathon, which takes place the following weekend.

Proceeds from the Rotary Run Charity Classic support several local organizations and programs, including the District 181 Foundation, the Hinsdale Hospital Foundation, the Hansen Center therapeutic riding program, and The Community House, where Rotary members meet each Friday. Money raised through the run also supports the year-round work of Rotary Club, including its scholarship program, bikes for military kids, its mentoring program at Anne M. Jeans School, and Operation Pollination, a local effort to increase the world's monarch butterfly population.

"Money is shared across a multitude of organizations and projects," Wanless said.

After a career in sales that required frequent travel around the country, Wanless began a second career in 2017 - one that allowed him to spend more time at home with his wife and children.

"I always had a true interest in investing and in economics," he said. Having finally reached a place where he has time to give, Wanless spends his days helping other families to reach their financial goals, whatever they might be.

And while Wanless himself will be working the event rather than walking or running, members of his family will lace up their shoes for the annual trek through the streets of Hinsdale.

Wanless said he feels "blessed and fortunate" to have the time and the opportunity to give back to the community as a Rotarian.

"It's rewarding to be involved," he said.