Boys and girls golf, girls tennis teams working to play best when it matters most 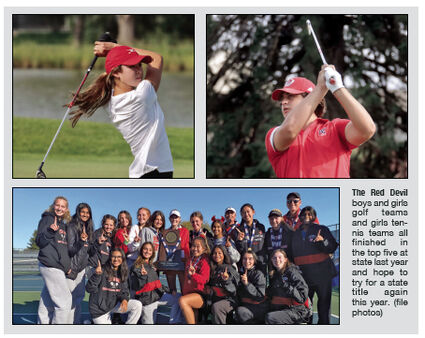 The varsity boys and girls golf and girls tennis coaches say their teams all bring some combination of talent, depth and experience to this season's competitions. They talk about their athletes and their hopes for the post-season in this, the second fall sports preview. The first installment ran Sept. 1 and the final article in the series will run Sept. 15.

Strengths: I think our strength right now is our depth. We have 14 guys. Some can shoot really low, some can shoot low rounds. They are very committed to golf. They all play tournaments outside of the golf season. They realize that we have a good number of students that can, on any day, put a good score up there.

Challenges: I think our challenges are similar to other schools. It's just dealing with pressure of the moment on the course. I don't think anybody is immune from that, regardless of how good the players are. That's something that we talk as a team about, how to overcome this pressure, how to cope with this pressure, especially in very meaningful tournaments, especially if it's postseason. It's figuring out how to find experience mimicking that type of pressure. We do a lot of competitive practice rounds. We try to maximize our tournaments to get ready for those competitive, pressured situations.

Who to watch: We definitely have our No. 1, Emil Riegger. He has committed to Drake and he has been playing outstanding so far. Up to date he's only carded one over par round in our competitions. He has been very, very stellar. Aside from that, we have Jack Mulligan. He went down to state last year as a sophomore, now he's a junior. We have a couple of sophomores that are up and coming. Emil is very clearly No. 1. The rest of the team is very, very in the mix of mid-70s rounds. I think time will tell who is going to be playing well when it's time to go postseason. It's hard to predict.

Season goal: My goal for the team was to find a way to play our best golf at the right time, to focus on the right things - to focus on the things we are able to control and not to be bothered by the things we are not able to control. The game of golf throws many uncontrollable things. They are all capable of playing good golf, it's just finding a way to do that at the right time. Golf is unpredictable and how you cope with challenges out there in essence determines how well you play. I think our potential is high and I think finding the right approach to realize it is what we're trying to focus on.

Furthermore: It's a tightly knit group. It's a really fun group of kids. It's a group of kids I enjoy being around. They are competitive. They are supportive of one another. It's a positive environment on the team while keeping it competitive. The internal dynamics are important, and I think we have the right mixture of intensity and fun at the same time.

Strengths: We are very talented. Our top four all competed downstate last year, so we have some experience. We've got some girls that work exceptionally hard at their game and have great potential to put some low scores up there. We're young but we're experienced.

Challenges: I think that the level of play in girls golf amongst probably the top five or 10 school has improved markedly over the past four or five years. When I started coaching, then to now, there are just more good players. We had won almost every invite last year. When we got down to state, the teams at the top just played so well. There is so much more talent. You have to play at the top of your game all the time. There are five schools that could win state. It kind of comes down to those who are playing the best at the right time.

Who to watch: We have a freshman, Lilly Riegger, who has played really well so far this year. She's Emil's (No. 1 boys player) younger sister. She's got great potential. It will be interesting to see how her season goes. Of our returning players from last year, Sarah Thornton is now a senior and has really grown as a leader. Elyssa Abdullah finished fourth individually last year. She was our top player all of last year and so far is our top player this year. Caroline Owens has been tremendous for us. Toral Bhatt has been really good last year and really good this year. There are a lot of really solid, sound players in our program right now.

Furthermore: It's an interesting season getting (classes) started this late. We're in our fourth week of practice. It's been a different start of the season not being in school.

Strengths: This is probably the biggest senior class we've had in a long time and also (we have) quite a bit of freshmen on varsity. I feel like it's a good balance of leaders and also newbies trying to learn the ropes. I have like eight captains because there are eight seniors.

Challenges: I think internally probably just keeping everyone healthy. We always have random things that happen. Knock on wood - hopefully that is not an issue. Externally there are just some loaded teams. I would say the big three for competition are New Trier, Lake Forest and Stevenson.

Who to watch: Sophia Kim. I could put her in singles or I could put her in doubles. She got second place in doubles last year, barely missed (first). I probably have to figure out do we try to get the win at doubles and then who is going to be her partner. The other two returners from last year's state lineup are Bridget Novatney and Nicole Hu. I've got a host of other people that are trying to be the next three spots.

Goal: Obviously our goals are to win sectionals, win conference, win state. The last one is going to be tough. I can't tell you what my lineup is going to be. I'm going to have to figure out how we can get that done or get the closest.

Furthermore: The parents have been awesome this year. The team is really doing a lot of team bonding activities and trying to be super-inclusive and create that team atmosphere. You don't really get that with tennis. I think it's appreciated by everyone.