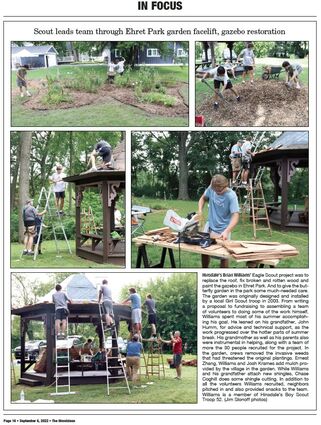 Hinsdale's Brian Williams' Eagle Scout project was to replace the roof, fix broken and rotten wood and paint the gazebo in Ehret Park. And to give the butterfly garden in the park some much-needed care. The garden was originally designed and installed by a local Girl Scout troop in 2003. From writing a proposal to fundraising to assembling a team of volunteers to doing some of the work himself, Williams spent most of his summer accomplishing his goal. He leaned on his grandfather, John Humm, for advice and technical support, as the work progressed over the hotter parts of summer break. His grandmother as well as his parents also were instrumental in helping, along with a team of more the 30 people recruited for the project. In the garden, crews removed the invasive weeds that had threatened the original plantings. Ernest Zhang, Williams and Josh Krames add mulch provided by the village in the garden. While Williams and his grandfather attach new shingles, Chase Coghill does some shingle cutting. In addition to all the volunteers Williams recruited, neighbors pitched in and also provided snacks to the team. Williams is a member of Hinsdale's Boy Scout Troop 52. (Jim Slonoff photos)