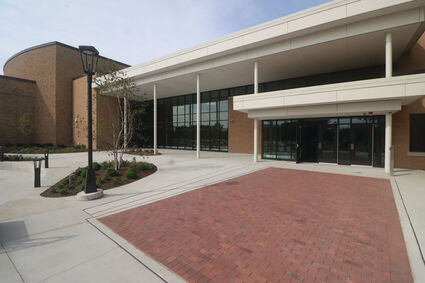 The new Grant Street entrance is a much more welcoming space than the old entrance through the "pool door." The outdoor tiered seating will offer a great place for students to hang out or even for small concerts, Principal Bill Walsh said.

Summer construction projects delayed the start of school at Hinsdale Central, but the new spaces likely impressed students and staff when they returned to class Tuesday.

One of the most noticeable is a new entrance along Grant Street, where the old entrance known as the "pool door" used to be. The Grant Street Plaza, as Hinsdale Central Principal Bill Walsh likes to call it, offers a much more appropriate first impression to the many who use this entrance. The area features a trophy case to house the school's impressive collection of athletic hardware and a small art gallery.

"Now you walk in here, you get a rich history of the athletic season, you're showcasing fine arts, right here in the entrance," Walsh said. "That's what says this is a school that values a lot."

Athletic director Dan Jones said the new entrance will be a fitting introduction to the school for people attending evening athletic events. He said he hadn't thought much about how it would look ahead of time.

"Once myself and the student athletes started putting the trophies in, we were just like, 'Wow, this is going to be pretty impressive,' " he said. "It's a huge improvement from the loading dock and garbage dumpsters they used to walk by to come in at night."

Another impressive space is the cafeteria, which has been redesigned to better serve the 650 students who use it each period. Traditional tables with benches are augmented by four-person high tops, many of which will offer a window seat.

"It's a more modern way to engage with your peers and to engage in a cafeteria space," Walsh said.

Students no longer will need to wait in seven separate serving lines, as everything is enclosed in what Walsh describes as a hospital-style cafeteria, with a walk-in cooler for beverages.

Red ceramic tile and red chairs add a spark of Red Devil color to the room, which features mostly white walls and a gray tile floor. Too much red can create too high of an energy level, he noted.

"You have to bring in these other subtle colors to set the tone," he said. "You're building the school spirit in other accent ways throughout the building."

The renovated courtyard off the cafeteria is about a third smaller, but still offers students a place to relax from the academic pressures of the school day, Walsh said.

"We lost our pond but we installed this beautiful new water feature," he said, noting the stone fountains. "Because it's enclosed, it's a safe space to be outside."

The courtyard is visible from the renovated library on the second floor, which has large windows that also overlook the new student commons and its "learning stairs."

While still a place to house books, the library has been redesigned to be a better learning environment, with six small-breakout rooms where teachers can work with students. A new career and tech ed space in the school's lower level will offer space for graphics, digital video production, woodworking, automotive, robotics, computer assisted drafting and other classes.

Back on the main floor, the pool area has been converted into a new gymnastics gym and the old gymnastics gym will serve as a multipurpose space that can be used for study hall during the day or athletic practices after school. A new fine arts space is located just off the Grant Street entrance.

A theme in several areas is improved ADA accessibility. 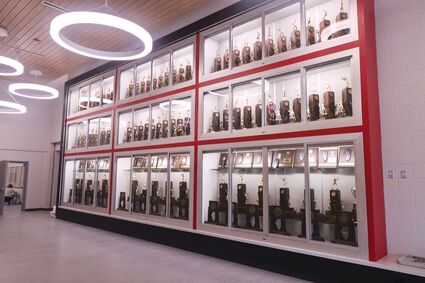 "There are three new elevators on campus that now get students who couldn't get places to places, and that's really critical," Walsh said.

Supply chain issues have plagued many construction projects, but Walsh credits Arcon Associates and Pepper Construction, who are managing the project, for planning ahead. The only items they are waiting for are several sets of doors.

"They sort of knew what they needed within the design features and ordered that stuff well in advance," Walsh said.

Central will be open to the public for tours from 10 a.m. to 2 p.m. Saturday, Sept. 24, during Homecoming weekend. Visitors will see the new Don Watson Aquatic Center, student services center, student commons, tech ed, fine arts, library and other areas.

Many areas of the school, built in 1949, were in need of updating, Walsh said.

"We are excited - really, really excited," he said.