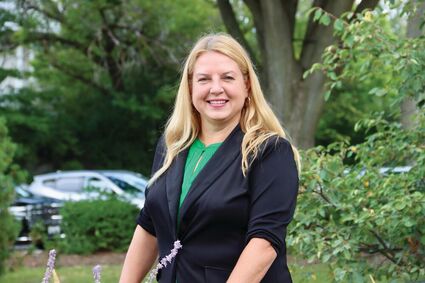 Andrianna Peterson enjoys the fact that every day is different for an assistant village manager. "You get to provide a lot support to staff and the village manager and board to further the strategic objectives of the community." (Jim Slonoff photo)

From the time she was a kid, municipal government has interested Andrianna Peterson, Hinsdale's newly hired assistant village manager.

"My mother was an employee of the city of Woodstock, and so growing up she instilled a love of public service and always had very interesting stories about the types of work the city was doing for residents," Peterson said. "I just thought it was very interesting that people could come together and reach a consensus on a topic and actually evoke that action. Then you were able to see the results and the fruits of that process."

That interest led her to student public administration at Northern Illinois University, where she earned bachelor's and master's degrees, and to positions in Clarendon Hills, Berkeley and La Grange. She also worked for a time at the West Central Municipal Conference, a regional association of about 40 local governments.

Her most recent post in La Grange was as village manager, but she said this isn't the first time she has gone from being the chief administrator to an assistant. She did so when she left Berkeley to move to La Grange.

"It's really just what I feel is right at the time," she said. "This was a wonderful opportunity in a fantastic community."

"I think it's an opportunity for me to do a lot of the things that I have historically done in other communities," she added. "I really like the kind of rolling up my shirtsleeves aspect of the job, being able to work on special projects."

One of those projects will be helping to plan the village's 150th anniversary celebration in 2023. Peterson said she has been getting up to speed on the good planning that already has been done.

Another area of focus for Peterson will be economic development. While La Grange has a busy road dissecting its central business district, she said the two villages' downtowns are similar.

"You have the train, it's highly walkable, a beautiful streetscape, a place that people want to be," she said.

In only her third week on the job, Peterson said has enjoyed getting to know her co-workers.

"I'm already just very impressed by all of Hinsdale's dedicated employees, and the pride they take in their work is reflective throughout the entire community," she said.

One of those co-workers is Brad Bloom, who will hold his assistant village manager title until he retires in February. Peterson said she is taking advantage of the opportunity to learn from him and tap into the knowledge he has accumulated after working in Hinsdale for decades.

"I think it works out well that we have this opportunity for me to learn from him over the next few months and absorb as much as I possibly can," Peterson said.

Peterson said she enjoys spending time with her family - husband Michael, a firefighter/paramedic and son Ian, a student at Purdue University. She also enjoys outdoor activities like hiking and boating and camping.

Peterson said she finds working in local government extremely rewarding because of the direct ability she has to affect residents' lives.

"I've found it to be a very fulfilling and humbling job and an important one," she said. "I've enjoyed it. I enjoy the profession immensely."