Travel back in time to 18th century 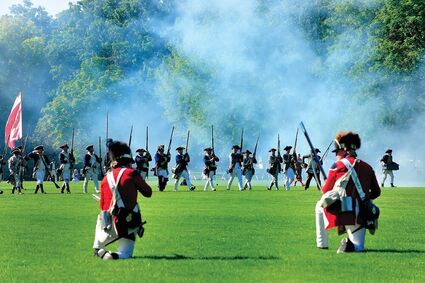 Visitors at Cantigny Park next weekend will have the chance to see what a Revolutionary War battle might have looked like, thanks to reenactors from the North West Territory Alliance. (photo by Steve Ivanov courtesy of Cantigny Park)

Ever hear of Alexander Hamilton?

Most likely - thanks to Broadway or Disney Plus - the answer is yes.

But folks probably know little about what life was like in the 18th century when Hamilton and the country's founders were working to set the colonies free from British rule. The Revolutionary War Reenactment set for Sept. 10-11 at Cantigny Park will give visitors the chance to learn about camp life, witness a battle and find out what people did for food and entertainment more than 200 years ago.

The most typical response for a first-time visitor is one of surprise, said Ron Feldman of Hamilton's Artillery, part of the North West Territory Alliance.

"I think it gets people to stop and think and appreciate how many conveniences we have today vs. back then," said Feldman, who has been a reenactor for the past 20 years. "These people weren't living in caves, necessarily, but they were awfully creative to wash their clothes and cook."

Meal prep, for example, didn't involve a trip to the local grocery store.

"Maybe shopping is done with a musket. Maybe it's going to a market," Feldman said.

The families who will be on site - divided into Loyalists and Crown Forces - will be dressed in authentic clothing and will offer demonstrations on everything from children's games to cooking.

"Eighty to 90 percent of the population didn't fight in the war," Feldman noted.

But, as the name indicates, the weekend will give visitors insight into military battles.

"We actually have a military musical group that will be performing throughout the day, because, again, music was very important in the Revolutionary War for parade and pomp and circumstances," Feldman said.

"And they used music to carry commands from the commanders," he added, noting that without cell phones or even walkie talkies, commanders used drum beat to let troops whether to advance, retreat or attack.

Feldman said people are more familiar with Hamilton thanks to Lin Manuel Miranda's musical, but some people still don't know he is on the $10 bill. And many don't know exactly what his role was in the early days of the nation's founding.

"What's really neat about our organization is there are some professional historians, but there are some amateur historians as well," Feldman said. "They can tell you some fascinating stories that you've never heard about.

And, of course, people can see the types of cannons, muskets and rifles used during the Revolutionary Wary.

"If you're a guns and ammo geek, there is plenty of that," he said.

Political views around history have changed over the past two decades, but Feldman said the information he offers visitors has not.

"I'm repeating the same thing over and over," he said. "I'm not adjusting it for the times. What happened happened. I can't change it. I can't massage it based on the latest and greatest moods."

Feldman became interested in becoming a reenactor after a co-worker pulled into the parking lot at work hauling a trailer with two cannons.

"Personally, what I get the most out of is just talking with people and talking about history, learning from each other," he said.

He compared the conversations to ones baseball fans have about stats, except instead of talking about the players and games, they talk about generals and battles.

He encouraged anyone with an interest in history to come out to the event.

"It's an opportunity to learn about living in the 18th century, about early American History, the founding of our country," he said. "It's like a mini-museum, not only of military equipment but personal wares and everyday items." 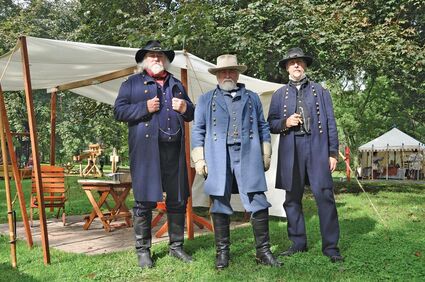 Participants in the Revolutionary War Reenactment wear clothing authentic to the time period and attempt to provide insight into civilian life as well as military battles. (photos courtesy of Cantigny Park)

The 10th Illinois Regiment and families bring history to life as the grounds of Graue Mill are transformed into a Union military camp during a Civil War Reenactment from 11 a.m. to 4 p.m. Saturday and Sunday, Sept. 3-4.

Civil War reenactors represent an actual volunteer regiment that fought in more than 15 major battles during the Civil War.