The low, boxy style of the home at 701 S. Taft road reflects the utilitarian, simple aesthetic of mid-century architect George Fred Keck. The peaceful courtyard is accessed by large sliding glass doors that bring the outside in. (Jim Slonoff photos)

Even a house of tomorrow needs some present-day rehabbing.

Over the last two years, Cynthia Curry and her husband, Carl, have restored a mid-century jewel tucked into Hinsdale's Woodlands neighborhood. The home, built by the well-known modernist architectural firm Keck & Keck in 1958, features an inventive ventilation method and storage placement, among other avant-garde touches of the era.

"It's a significant house," Curry said, standing next to a breeze block wall that hides the front door from street view. "This one needed to be saved."

The dark soapstone hearth contrasts stylishly with the white paneled walls of the large living room. In the corner, a gleaming metal spiral staircase extends down to the lower level. That had been in the original design but not installed when the home was built.

"We tried to do what we thought was good for the period," Curry said. "We were extremely fortunate to find this (staircase), which came from a penthouse on Lake Shore Drive."

"All original. It's beautiful at night," Curry said.

Next to the windows, which extend nearly from the floor to ceiling, she opened up doors to reveal louvered openings to let air in.

"Their idea was to ventilate without having leaky windows open," Curry explained, adding that all the original hardware was taken out for cleaning and put back. "Believe it or not, when you open them all up you get a cross breeze like if you had big windows open,"

Carpeting was replaced with quartersawn oak floors and the skylights throughout the house were refurbished.

A large floating built-in cabinet stands between the living room and dining room, helping define the spaces without closing them off from one another. There remains some mystery, however, around a swinging mirrored panel attached to the end.

"Nobody has any idea why they would have done that," Curry said, noting a crack in the old glass panel. "It's just a unique feature."

George Fred Keck had lots of ideas about 20th century home design, which were on full display in his "House of Tomorrow" at the 1933 Century of Progress International Exposition in Chicago. He and brother William clearly took some cues from the Prairie Style movement's celebration of the horizontal and the long, low landscape of the Midwest. In an interview, George Fred explained that the exhibit aimed "not to find a specific form to a house, but to find solutions to the many and varied contemporary requirements of a residence in a simple and direct manner."

Curry said Keck & Keck's "passive solar" concept, which included elements like cross ventilation, shading and rooftop decks, was ahead of its time. So a rooftop deck was added by the Currys with tiles that drain.

"When it rains, it goes through the drains and it's always dry out here," she said. "We have solar panels on the roof."

A private courtyard in the back of the house feels like a serene sanctuary even in the middle of the burbs.

She appreciates the courage of the home's first owners, Armen and Dorothy Avedisian, for taking a chance with the unorthodox style.

"They wanted to do something that was new, and this was new," Curry said.

The brothers were brought back by the Avedisians in 1970 to make some updates, including moving the garage and enclosing a patio to make an office. During the renovation Curry learned that the wiring and plumbing had been executed above normal standards.

"Everything they did was beyond what was the expectation of the time," she said.

Apparently having an indoor grill next to the wet bar was an amenity of the era, but the Currys decided that niche could be better utilized. The lower level also has louvered windows and lots of useful built-in storage like the upstairs. 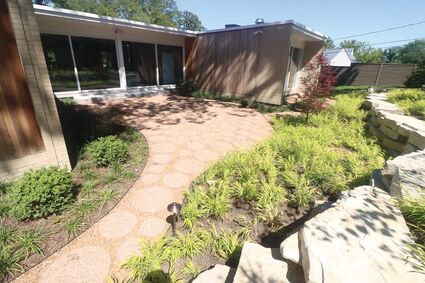 The House of Tomorrow from the exposition currently sits in the Indiana Dunes in need of significant rehab. Curry, a Hinsdale native and member of the village's plan commission, wanted to make sure this Keck & Keck home didn't decay or, worse, disappear. Familiar with the second owners, she expressed a desire to purchase it.

"To see it fall - like a lot of them do - it just seemed unnecessary," she said.

Curry said the house is an invaluable example of the village's architectural evolution.

"We thought this is representative of the growth in Hinsdale," she said. "This house is kind of a stepping stone."

Having preserved several homes in town, Curry said the value is more than just architectural.