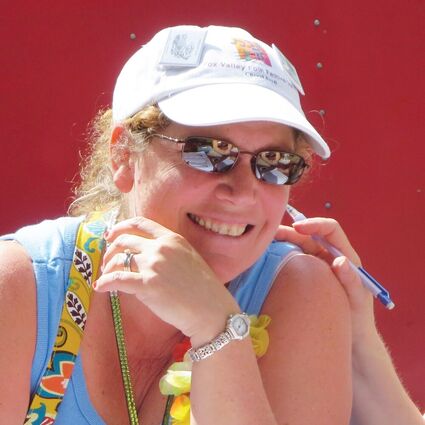 Cheryl Joyal, co-producer of The Fox Valley Folk Music and Storytelling Festival, is eager for Hinsdale to host the 46th annual festival this weekend for the first time. Visit https://fox-valley-folklore-society.square.site for all the details on attending in person and via livestream. (photo provided)

What is the Fox Valley Music & Storytelling Festival?

Hinsdale is going unplugged this weekend - musically speaking - when it plays host to one of the largest folk music events in the Midwest.

The 46th annual Fox Valley Folk Music & Storytelling Festival is strumming its way to the Unitarian Church of Hinsdale from Saturday to Monday, Sept. 3-5. Normally the event is staged some 20 miles to the west at Island Park in Geneva, according to festival co-producer Cheryl Joyal. The sudden passing of longtime organizer Juel Ulven at the end of July, however, led to a relocation to a smaller venue for a scaled down version.

"We're pretty excited about it," said Joyal, who, having attended numerous Acoustic Renaissance concerts at the Unitarian Church over the years, felt it would serve nicely. "They graciously offered to host. I think it will bring people in who may not have ventured out to Geneva for the festival."

While Joyal said the church can't accommodate the thousands of enthusiasts who normally turn out for the event, this year's mix of in-person and livestreamed performances will enable broad participation - as they learned through putting on remote festivals the last two years.

"It actually was a really good experience (during COVID) because we attracted a wider audience online, not just from the Chicago area but even internationally," she said.

The festival is put on by the Fox Valley Folklore Society, a group Joyal discovered as a grad student in the 1980s. She volunteered to help coordinate the fest starting in 2000 and worked closely with society founder Ulven.

The musical acts, including February Sky, Tim Grimm and Rev. Robert Jones, will perform in person and also be livestreamed. The storytelling sessions will be exclusively livestreamed.

"In the evening, we will have festival mainstage music concerts," Joyal said. "Those will be longer sets of 45 minutes so guests can have a really nice in-depth look at each one of the performers and the styles they can bring.

"All of artists have so much breadth in the range of what they can do, from ship songs to blues to traditional folk," she continued. "All of those styles are incorporated into the folk music tradition."

Joyal said attendees also always appreciate the special workshops that are held with the artists.

"What we've tried to do is keep some of the uniqueness of the festival with performers coming together on one stage to do a kind of pass-the-mic kind of thing," she said. "You've got singer-songwriters inspired by their personal experience, and others motivated by social justice issues."

She said the festival can feel like a reunion of sorts for longtime friends of the folklore society.

"Because we are an organization that stays connected throughout the year, it's the sharing of what we love and the community that we bring together," Joyal said. "Part of the experience is interacting with each other."

But she also looks forward to meeting newcomers in their one-off (probably) Hinsdale detour.

"We want to give everyone an opportunity to share with us," she said. – by Ken Knutson