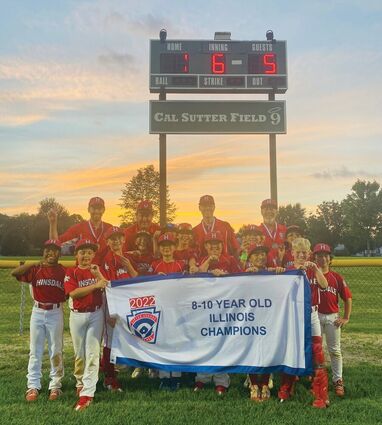 Every member of Hinsdale's three Little League All-Star teams had winning on their mind as they traveled to the state tournament in Moline. Chances are none of them expected to also make history.

Even Hinsdale Little League President Robert Tonn said he was surprised when all three Hinsdale teams - 10U, 11U and 12U - won their respective state titles, sweeping the tournament for the first time in Illinois history.

Jimmy Macri, a member of the 10U team, was chosen by the Hinsdale Little League coaches to play right field. He said the team was undefeated going into the state championship game. In fact, he and his teammates found themselves in unfamiliar territory when they fell a run behind early in the game.

But that would be the only run for the other team, which just happened to be from neighboring Western Springs. The final score was 5-1.

"I was nervous and excited," at the possibility of a state championship, Jimmy said, and when the final out was made, the entire team piled onto the mound to celebrate.

"It feels incredible," said the Madison School fifth-grader. "We were that one team that won the whole thing."

The Hinsdale 10U All-Stars were coached by John O'Toole, Damon Phelan and Luke Goodwin.

Keaton Cassell said the 11U All-Stars were feeling the pressure when they entered their final game, which also was played against Western Springs. The 10U and 12U teams had already clinched their titles, but that wasn't the only pressure felt by Keaton and other members of the 11U team.

Having won the state championship as a member of the 10U team in 2021, Keaton and his teammates were hoping for a repeat.

"It feels great winning back to back," said Keaton, who pitched and played center field in the final game.

The Hinsdale Middle School sixth-grader admits he was a little nervous when Western Springs went up 5-0 in the first inning. But Hinsdale came back with 8 runs in the second inning, leading up to a final score of 18-8.

Keaton said he is already looking forward to next season, when he hopes to go for a three-peat of his own as a member of the 2023 Hinsdale 12U All-Stars.

The Hinsdale 11U All-Stars were coached by Chris Marnell, Craig Cassell and Bill Main.

A trophy isn't the only thing that Will Barclay brought home from his final season in Little League. He also gained a new nickname.

While pitching for the Hinsdale All-Stars 12U in the regional tournament in Indianapolis, Will said his curve ball was admired by a commentator, who said it looked like a Frisbee.

"Now, that's my nickname," said Will, a seventh-grader at St. Isaac Jogues School.

He said it was a great way to close out his Little League career.

Going into the state tournament, Will said he thought the team had the potential to capture the title, but he tried to focus on winning one game at a time. On the final out of the game, he joined his teammates to celebrate on the pitcher's mound.

The 10U and 11U teams' seasons ended with the state championship game, but the 12U team, coached by Steve Pabst, Justin Perucki and Jason Havens, represented Illinois at the Great Lakes Regional tournament in Indianapolis. The trip began with a police escort out of town from Peirce Park. 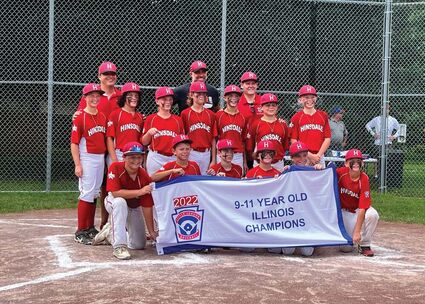 "It's cool that the whole town of Hinsdale supported us," Will said.

The tournament was the last not only for the 12U team, but for Coach Tonn.

"I've aged out of the program," said Tonn, whose youngest child Scarlett completed her last season this year.

Tonn said there's no doubt that the program's success is strengthened by the support of players' parents and the whole town's passion for youth sports.

"We have over 100 volunteer coaches and board members and league officials that help to run the program," Tonn said. But in the end, it's the players who won the game and made Illinois Little League history.

"It's the kids' talent and hard work that got them these championships," Tonn said.