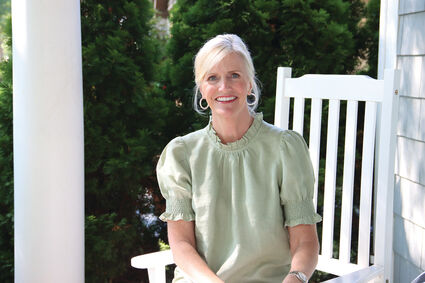 What inspired your new suitcase design?

Hinsdale resident Maggie Gerth spent several years as an investment banker, but no one needs to be good at math to know that six people, six suitcases, one luggage rack and one hotel room add up to one big mess.

"I was always looking for ways to organize the girls better," said Gerth, whose trips with her husband and four daughters seemed to always involve luggage on the floor, the beds and every other available surface.

That's when she got the idea for a suitcase that would solve the problem. After many years of dreaming, planning and designing, Gerth's PROPS suitcase is ready for its public debut.

The PROPS suitcase is a carry-on sized piece of luggage equipped with self-contained legs that easily convert to a built-in luggage rack. The traveler simply pops out the legs, keeping the luggage and its contents off the floor, neatly contained and easily accessible.

Gerth said PROPS remained nothing more than an idea for many years before she finally developed the first prototype. It wasn't until then that she realized a second perk of her PROPS product. With its legs extended, the surface of the closed case becomes a makeshift workspace that can hold a traveler's laptop, phone, coffee cup and more.

"The secondary use is actually becoming, for some people, a bigger use," said Gerth, whose own suitcase gets plenty of attention as she travels for her job with a nationwide housing developer.

The product officially launched in June after years of development and some delays due to COVID. Gerth said those delays turned out to be a blessing, as she spent the time perfecting the product that for so long had existed only in her imagination.

The experience of developing and marketing her own product has taught her a lot, Gerth said, and not just about product development. Never one for Facebook or Instagram, Gerth has learned to navigate the world of social media and its influencers to promote her product.

And though her daughters are all grown now, the former stay-at-home mom said she hopes they also are learning from the experience and seeing that even in her 50s, a woman can do anything she puts her mind to.

"It's not easy and it's not cheap," Gerth said of her journey to business owner and product developer. "But it was worth everything just for the experience."

Even before the first orders for the PROPS carry-on are filled, Gerth said she is working on more products that will feature her company's unique stand-up design and high-quality features.

"We're already developing the mid size," said Gerth, who said she also is considering a duffle bag for use at the gym, campground or any destination where a clean surface is hard to find.

PROPS is available exclusively through the company's website. And despite its recent debut on the market, the product already is getting attention. Gerth said she and her PROPS suitcase will be featured in Entrepreneur Magazine in October.

And no matter where it goes from here, she said she's proud to have seen what was long just a vision into reality. - by Sandy Illian Bosch