Excursions to France, El Salvador immerse educators in the languages they teach 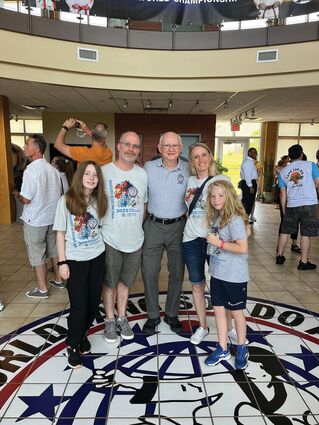 An educator's passion for their field doesn't end when class is dismissed. At least that's the case with Hinsdale Central High School foreign language teachers Jennifer Klein-Chaney and Rebecca O'Connor, both of whom spent time this summer immersing themselves in the languages they teach.

This summer's trip to France was more than a vacation for teacher Klein-Chaney. It was a chance to reconnect with family and friends while immersing herself once again in her native language. Klein-Chaney, who made the United States her permanent home in 2006, took this summer's trip with her husband and two children, ages 11 and 13.

Klein-Chaney said she and her family take in the slower pace of France and often take the opportunity to explore other parts of Europe. She also enjoys sharing her home and heritage with her husband and children while revisiting the culture in which she was raised.

After her family and childhood friends, Klein-Chaney said it's the food that she misses most. She and her family always take time to enjoy some of her favorite foods and eateries.

"We visit a lot of bakery shops," Klein-Chaney said.

The family's annual homecoming typically takes place in June, but it was pushed to July this year in order to make time for the Tang Soo Do Association World Championships in North Carolina.

"We had never participated in a world championship," said Klein-Chaney, who took part in the June competition with her husband and son.

Training at Eagle Academy in Warrenville two or three times a week, Klein-Chaney has achieved the rank of first degree black belt.

"I never thought I would ever delve into martial arts," said Klein-Chaney, who took her first class in the ancient Korean martial art six years ago, at age 40. She said she's seen an improvement in her balance and in management of the pain she suffers due to an autoimmune condition.

Performing with a long stick known as a bo staff, Klein-Chaney took home a medal from this year's World Championships.

"Surprisingly, I placed third in the weapons division," she said.

Klein-Chaney said she uses the sport to challenge and motivate not only herself, but her students at Hinsdale Central.

"I want to show them persistence," she said, and that with work and a good attitude, a bad day can always be followed by a better one.

During the school year, Rebecca O'Connor uses her Spanish speaking skills to teach students at Hinsdale Central. During the summer, her second language helps to provide safe drinking water for people in other parts of the world.

O'Connor traveled to El Salvador with Living Waters for the World, a volunteer-driven organization that provides sustainable, clean drinking water for communities in the United States and other parts of the world. Her role in the project was as interpreter, facilitating communication between English-speaking volunteers and Spanish-speaking residents of the villages where she worked and stayed.

This was O'Connor's second summer trip to El Salvador and her husband's first. A mechanical engineer, he stepped in to fill a last-minute opening.

"His skills were really useful for our team," O'Connor said.

O'Connor said her relationship with Living Waters for the World began in 2020 when she volunteered to translate documents. That was followed by interpreting Zoom meetings and finally, trips to worksites such as the one in El Paraiso.

Teams from Living Waters for the World install purification systems and then train locals to run and maintain the systems. The goal is to leave the community with a fully sustainable, safe source of water. 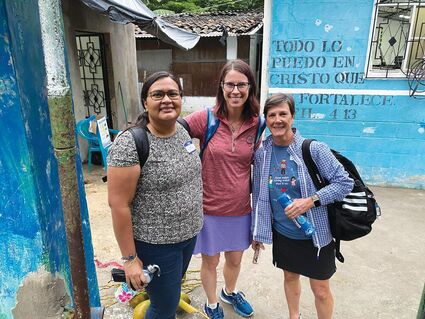 "It's a great way to use my Spanish to do something that's exciting for me," O'Connor said.

In the classroom, O'Connor typically has a stronger grasp of the language than her students, but her skills are put to the test in El Salvador. She said she added some new words to her Spanish vocabulary this summer.

"People don't speak English there. You can't get by with English at all," she said.

Upon her return, O'Connor said, she continued to sharpen her skills by reading books in Spanish and listening to podcasts in Spanish.

"In summer, I try to do at least an hour a day, just to keep myself in the language," said O'Connor, who said that even after more than 20 years of teaching, there is always more to learn.

Editor's note: This is the second in a two-part series. The first installment ran Aug. 11.