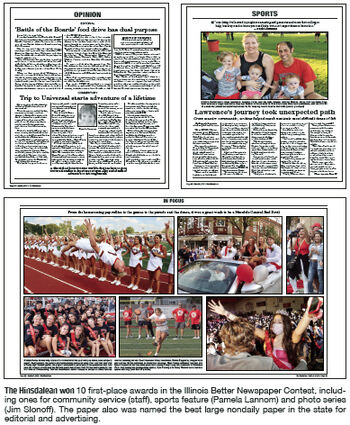 The Hinsdalean won 10 first-place awards in the Illinois Better Newspaper Contest, including ones for community service (staff), sports feature (Pamela Lannom) and photo series (Jim Slonoff). The paper also was named the best large nondaily paper in the state for editorial and advertising.

For the third year in a row, The Hinsdalean was named the best large nondaily newspaper in the Illinois Better Newspaper Contest.

The paper earned the Will Loomis Memorial Trophy and the Sam Zito Award of Excellence after receiving the most points in the Illinois Press Association's editorial and advertising contests, respectively. The awards were presented at the IPA's annual convention Friday in Springfield.

"When I worked at The Doings, we won the sweepstakes award a few times back in the 1980s," said Jim Slonoff, publisher and co-owner of The Hinsdalean. "Our staff at the time numbered around 60 employees. At The Hinsdalean today, we have seven members on our team - four full time and three part time. If you told me one day we'd win a sweepstakes here, I probably would have said you were out of your mind. Now to have a three-peat in both the advertising and editorial sweepstakes is overwhelming. The credit goes to the dedication and hard work everyone puts in for our readers and advertisers."

"Our goal is always to create the best newspaper we can for our readers," she said. "To have our peers recognize the work we do as excellent is a humbling and rewarding experience. We will continue working to do our very best to produce the best community newspaper in the state."

The Hinsdalean won 42 awards in the 2021 editorial contest (see sidebar), including 10 first-place awards.

The staff won first place in community service for its Battle of the Boards food drive. The seven junior boards profiled in the series collected more than six tons of food and almost $2,500 for HCS Family Services' two food pantries.

"An engaging series of stories that highlights the efforts of area youth to help out those most vulnerable in the community," judges wrote.

Editor Pamela Lannom earned three first-place awards, including one for her editorial, "People pleasing can be dangerous motive for board." She also took first place in sports news for "Girls swimming ties for second place" and in sports features for "Lawrence's journey took unexpected path."

"I felt the emotion of the team and those covering them in the pictures and article. Unfortunately all of us in the news business have seen and felt the hurt of the loss of young lives," judges wrote of the sports news story.

"Clearly the best among entries in this category, reflecting a keen sense of timing and composition," judges wrote of his photo series.

Almost 100 daily and nondaily newspapers submitted 1,725 entries in 40 editorial categories in the contest, which was judged by the Alabama Press Association.

"Becky's pride in her work and talent shows in every ad she creates," said Lisa Skrapka, account executive for The Hinsdalean. "She is very conscientious of regular and long-time advertisers' certain preferences in design but also loves the challenge of designing ads for new clients.