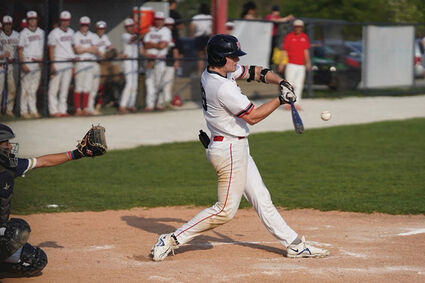 After helping power the Hinsdale Central Red Devils baseball team to its second straight conference title in his senior year this spring, Hinsdale's Luke Adams last weekend signed to play with the Milwaukee Brewers organization. "I knew it would be more of a job and a lifestyle now," Adams said of the decision. (photo courtesy of Dan Adams)

The Hinsdale resident and recently graduated Red Devil star player had watched the draft's 11th round livestream on July 19 - the third and final day - with disappointing results.

"After my name didn't get picked, I turned it off," Luke said.

About 20 minutes later he received a phone call from a Milwaukee Brewers scout, who informed him he was the team's 12th-round selection.

"I tried to find it online but actually didn't see my name get picked," Luke said, later confirming the news through a draft tracking website. "It was a really weird experience."

A jubilant one, as well, said his dad, Dan Adams.

"Getting that phone call was a once in a lifetime moment," he said. "Fortunately my wife and I were in the room when it happened."

Up until then Luke had been preparing for life as a Michigan State University student and Spartans' baseball program commit. Now he had a major decision to make, literally. His strong connection to MSU and desire to pursue his education had competition.

"It definitely was a two-week process," said Luke, now the one making the pick.

Consulting with loved ones and mentors, Luke ultimately opted to swing for the big league fences.

"I guess I just realized the opportunity was in front of me," he said. "I also thought playing baseball year-round would help me a lot. I thought this was the better option."

On Saturday Luke let the Brewers know his decision and broke the news to his understanding MSU coaches. By Sunday morning he was on a plane to the franchise's rookie camp in Phoenix, where he underwent a battery of medical tests before signing his $282,500 contract on Monday. The amount, commensurate with that of a sixth-round draft pick, demonstrated the lengths the team went to lure Luke from his full college ride.

Dan Adams said several teams showed interest in his son, but the connection with the Brewers seemed the most genuine.

"The Brewers and the area scout invested the time and got to meet Luke and know Luke," Dan said. "She spent hours watching his games and coming to our house to really know him as a player and as a person."

In a story posted on the Brewers' mlb.com site, Tod Johnson, the team's vice president of domestic scouting, indicated Luke's "cold-weather" background and his impressive play with the Illinois Valley Pistol Shrimp of the collegiate summer league validated their scouting.

"He's performing well, so that's a really good sign. We feel like he has a pretty exciting bat profile that we want to get a chance to develop," Johnson said.

The 6-foot 4-inch, right-handed hitting Luke has mostly played third base. He was an All-State team selection this season.

"We'll definitely try to keep him on the dirt and make him a third baseman," Johnson said. "He's pretty good over there, pretty athletic, but if there's a fallback there, it's right field. But we'll definitely give him a shot to stick at third."

While college may have been the safer path, Dan said his son followed his heart and his gut.

"Luke came to the conclusion that he really did want to make a run at (pro baseball)," he said.

Reflecting on the numerous cross-country trips the two of them took for over the years, Dan said he's most proud of Luke's kind, warm character, which he expects will continue to serve him well going forward

"He has the ability to have fun and play with everybody," he said, noting that Luke stopped by the Hinsdale Little League 11U team before they headed off to play in the state tournament.

Luke said he was flooded with congratulations from past coaches, teammates and friends once the news broke.

He will be in Arizona through August, at which point the team will decide his next assignment. Luke said this week is an acclimation period for him, which, to his chagrin, means just practice, no games. He hopes to be playing games this weekend.

"When I start playing I hope that I rake and play well and prove that I was a good draft pick," he said.