Teachers gain new knowledge of their own 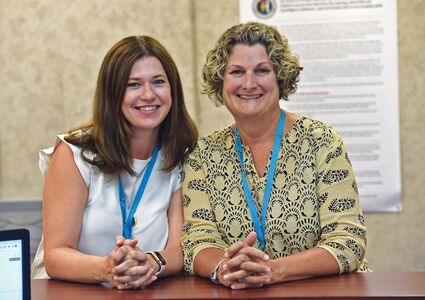 Hinsdale Central teachers Jordan Stob and Sue Grady said their experience as co-directors of Hinsdale Central's summer school program opened their eyes to the work that goes on outside of the classroom to make a school run smoothly.

The months of June and July are precious to most teachers. After all, having summers free is one big perk in an often stressful and difficult job. But Hinsdale Central High School teachers Susan Grady and Jordan Stob said they'll never regret trading in a part of their summer break to serve as co-directors of summer school.

"I have loved it all," said Stob, who joined Grady for the first time this summer. Grady, known as "Frau Grady" to students in her German language classes, has worked on summer school since 2020.

As co-directors, Grady and Stob assume roles ranging from curriculum director to principal. They determine class schedules, hire teachers, organize bus routes and tend to the inevitable but unexpected issues that arise throughout the six weeks of summer school.

When Grady took on the summer school position in 2020, it turned out to be an even bigger job than expected. After COVID-19 hit in March 2020, she and the rest of the summer school staff did a quick pivot to offer online classes. They also added "resolution management" classes to help students resolve incomplete grades resulting from the stresses of the pandemic.

"She pushes people to get outside their comfort zone," Stob said of Grady. And while summer school certainly was unfamiliar when Stob began the position late last year, she said she's already looking forward to doing it again.

Together the pair oversee six weeks of classes divided into two three-week semesters. The classes are taught by 30 teachers and attended by 260 students. Some classes take place online, while others are in the classroom. Classes, which ended July 21, were taught from 8 a.m. to 1 p.m. Monday through Thursday.

This summer's class offering included 18 courses in the first three-week semester and nine in the second semester. Each co-director took the lead during one of the two semesters, leaving the other with a little more of her summer to enjoy.

Summer school at Hinsdale Central isn't only for completing incomplete classes. It's also a way for students to add classes that don't fit into their fall or spring schedules. Civics, consumer education and health are all required for graduation and are all offered as summer classes.

"A lot of students take those courses during the summer," Grady said, freeing up time for other classes during the regular school year.

Grady and Stob said the job of summer school director requires the wearing of many hats, which has led both to a greater understanding and appreciation for the roles of those working outside of the classroom.

"There's always a way to help a kid," said Stob, who as summer school director has seen how staff members in every part of the school strive to support Central's students. 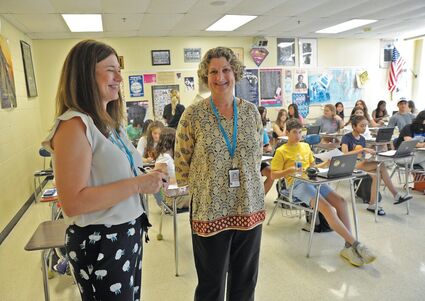 Stob and Grady check in on a summer school class at Hinsdale Central. (photos by Jon Langham for The Hinsdalean)

Both teachers said their summer jobs have left them with a "wider vision" and a deeper understanding of their students and their lives outside of the classroom. That understanding, Stob said, will make her a better teacher when she returns to the classroom this September.

She'll also return with a few new acquaintances. As co-director, Stob said she met fellow Central employees whom she might never have encountered in her regular teaching position.

"Now, I know them by name," she said of her co-workers in finance, communications, food service, security and other departments throughout the school.

With summer school behind them, Stob and Grady will take a little time to relax before spending another part of summer preparing for the school year ahead. Stob is teaching a new class next semester, while Grady said she has three new novels in her curriculum. And soon after fall classes begin, they'll turn their attention to planning for summer school 2023.