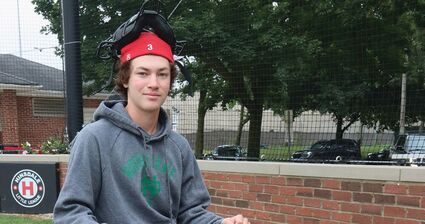 Whether he's playing or serving as the game's umpire, Cameron Linn of Hinsdale said Peirce Park is one of his favorite places to be. (Jim Slonoff photos)

Cameron Linn can't remember a summer that didn't involve baseball, but until last summer, his time on the field was spent strictly in front of home plate.

"I love being around baseball and Peirce Park," said Linn, who spent this summer not as a player, but behind the plate as an umpire for Hinsdale Little League's 7U, 8U and 9U games.

Players who complete their time on the 12-year-old Little League team are eligible to serve as umpires, and as a rising eighth-grader, Linn took the opportunity to spend more time on his beloved baseball field while also making a little extra money.

The role of umpire goes to whomever speaks first, Linn said. An online schedule tells umpires which games are available, which allows them to sign up for those that fit their schedules. Linn said he often checks the website about 20 minutes before games, just in case someone has a change of plans. Games typically last no more than an hour, which leaves Linn plenty of time for other summer activities, including more baseball.

A member of a Hinsdale/Clarendon Hills travel league, Linn said he knew long ago that he would one day stand behind home plate. As this season's Little League season began, Linn and other would-be umpires attended a training session where they learned things like where to stand and how to properly tell a strike from a ball. Linn said balls and strikes look much different from the vantage point of the umpire.

"You see everything a lot differently," he said.

His first summer job has given Linn a new appreciation for the job of the umpire, and it affords him the flexibility he needs to continue playing baseball - something he has no plans of stopping.

"Umping makes me want to play more," he said.

It's been years since Hunter Tonn played at Peirce Park, but his summers always are spent on the baseball field. An umpire for five seasons, including this one, the recent Hinsdale Central graduate also manages the Hinsdale Little League All-Star tournament at Peirce Park.

"I just kind of help run the whole tournament," he said. But first, he helps to prepare the park as a contender to host the games.

"There's a lot of parks that want to host these tournaments," Tonn said, so proper maintenance of the field is crucial. 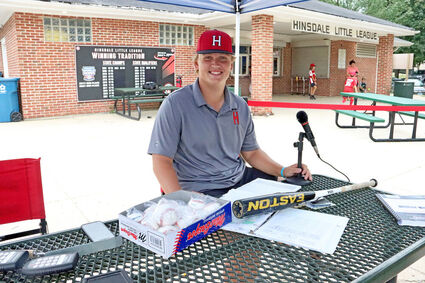 Recent Hinsdale Central graduate Hunter Tonn is headed to the University of Tennessee, but he said he would welcome the chance to return to his job as All-Star Tournament manager next summer.

As tournament manager, Tonn keeps in touch with all of the participating teams and provides them with all of the information they need. During games he's responsible for things like counting pitches and seeing that the rules are properly followed.

"I make sure they're all getting their playing time," he said.

Tonn said the job of tournament manager requires good communication and comes with a good deal of responsibility. If a game is canceled due to weather, it's up to him to relay that message.

"I've spent my whole life in baseball," Tonn said, and he knows what these games mean to the players, coaches and parents.

"This is really important to them, and I'm playing an important role," he said. That's something Tonn said he never forgets.