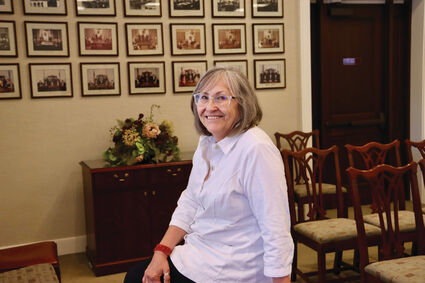 Chris Bruton, who has served as Hinsdale's village clerk for the past 17 years, enjoys reading, gardening, quilting, cooking and caring for family when she's not at work. (Jim Slonoff photo)

At the time Chris Bruton graduated from college, women were encouraged to follow one of two career paths - nursing or teaching. She planned to be an English teacher, only to discover the job market was flooded with women with the same ambition.

A career in municipal government never occurred to her at the time, she said.

"I had no idea. None. However, had I had a sense of it when I went away to school, that this was actually a thing you could learn about, that would have opened my eyes a lot sooner," she said.

Her first contact with municipal government was working in the parks and recreation department in Riverside, where she was employed part-time while her son and daughter were young. She later became village clerk in Riverside and, when she was ready to work full time, came to work in the water billing department in Hinsdale. When the village clerk position became vacant, then-village manager Dave Cook offered Bruton the job.

"You maintain all the official records of the village, all the ordinances and resolutions, the laws of the land, if you will," she said. "I push a lot of paper. The way I think of myself is the chief paper pusher."

Bruton also is responsible for compiling digital board packets, which can exceed 200 pages, and for recording minutes at the village board and zoning board of appeals meetings.

"A lot of people hate attending those kinds of meetings," she said. "I actually like it because I can only be an observer. You really get to see who people are and what's really going on with them and what their concerns are. I enjoy it.

But her favorite part of the job is dealing with residents. And the occasional nonresident.

"You'll get a call from an older person, resident - sometimes not - and they'll want to know where there is a good restaurant," she said. "They'll want to know something anybody could Google, but they can't, so you get to talk to them and that's kind of nice. They're cute."

Complaint calls aren't that common, she said, crediting her colleagues in village hall.

"We have a very qualified, friendly, capable staff," she said.

Bruton admitted to having some trepidation when she first came to work here.

"When I first came from Riverside and I lived there, I knew lots of people. When I came here, I was like, well, I won't know anybody. It will be different," she said.

It was - but only for a while.

"After all these years, I've met so many nice residents and know them by name and by sight," she said. "There's a lot of nice people here."

She also appreciates the people she works with and expressed particular admiration for those who serve on the village board.

"You have to admire the time they spend of their own free will without financial renumeration," she said. "It's a gift to the community."

She also appreciates the opportunity to see how government operates locally.

"It's a perspective you don't get if you just look at the state and federal level," she said. "At the municipal level, these are your neighbors. It's actually personal and effective - as opposed to not."