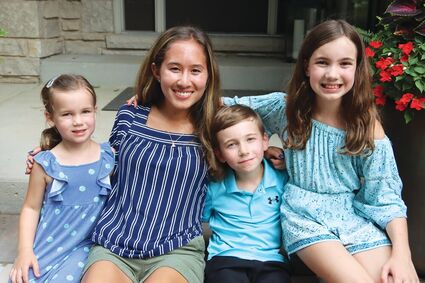 Isabella Terry (second from left) said she can't think of a better way to spend her summer than being a nanny for Lauren, Nathan and Corrin Ponto, a job she shares with Cece Lynch.

Isabella Terry's last summer before college is anything but lazy. As a nanny to three active children, her days are full of activities and responsibilities. But they're also filled with a whole lot of fun, Terry said.

The recent Hinsdale Central graduate cares for Amy Ponto's three children, ages 9, 6 and 5. Terry has babysat since she was 14, but is spending her first summer as a nanny, sharing responsibilities with her friend, Cece Lynch.

"We each do a couple of days a week," Terry said. Tag teaming with Lynch means both girls have time for other things, and Ponto can be assured of the help she needs to keep up with work, the house and family while the kids are free from school.

Ponto said she enjoys knowing her kids are having fun during summer break. Terry and Lynch drive the children to activities, make them lunch and play.

"The girls are really energetic," Ponto said, which is a good match for her three active children.

Terry said finding something that keeps all three children entertained at the same time can sometimes be a challenge, but that's helping to develop her creativity and adaptability. Those aren't the only benefits that Terry hopes to take from summer break and into her first year of college.

"I enjoy the kids' optimism and happiness. We sometimes forget to have that positive view," Terry said.

She's also gained a new appreciation for her own parents and caregivers.

"I come home and I'm so exhausted sometimes," Terry said.

And though it can be hard work, Terry said she can't think of a better summer job.

Joanie Sanders and her sister, Maggie, are sharing the task of caring for their neighbors' children this summer. Both girls have babysat Stephanie Tuthill's children before, and this is their second summer as nannies.

"I think of nannying as working in the day and babysitting as the nighttime," Joanie said, and the former generally requires more work than the latter.

"There's a lot more to do during the day," said Joanie, who is sharing her childcare skills with two Hinsdale families this summer. While the Tuthill children are 7, 5 and 3, her other charges are in their teens.

"I mostly just take care of driving," she said of the older children. The younger children, however, require a little more care and attention.

With the Tuthill children, she spends time playing in the sprinkler, going to the neighborhood park and walking the kids to playdates and piano lessons.

Revisiting activities of her own childhood in Hinsdale is a fun part of the job, said Joanie, who, like the Tuthills grew up near Melin Park. She will be a junior this fall at the University of Illinois, where her sister will be a freshman. 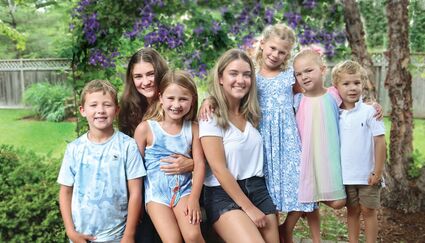 Nannies and sisters Maggie and Joanie Sanders are making summer more fun for kids in their Hinsdale neighborhood. On the left are Maggie and her summer charges, Parker and Caroline Otzen. To the right is Joanie with Grace, Caroline and Brooks Tuthill, who live next door to Parker and Caroline. (Jim Slonoff photos)

Joanie also takes the children to the library and recommends movies she enjoyed as a kid.

"I just think it's fun to hang out with the kids," she said. Later this summer she will take an overnight shift with each family. That will bring new challenges, Joanie said, but also new opportunities to build the problem-solving and time management skills that her work as a nanny requires.

"When I have to babysit both families I have to plan out my day and make sure I have time to get from the first family to my second family," Joanie said.

The ability to adapt to her families' schedules from week to week is important, too, and something that mom Stephanie Tuthill appreciates.

Whether she is attending to her work as a speech language pathologist or enjoying the chance to run errands without three kids in tow, Tuthill said she is confident her children are in good hands when the Sanders sisters are left in charge.