Fourth of July a reminder of how division can heal 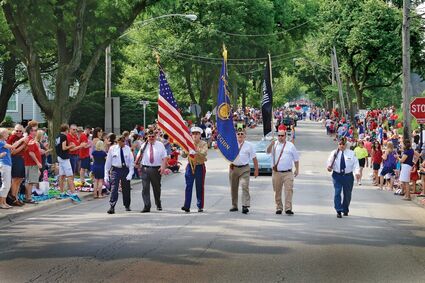 "You have to love a nation that celebrates its independence every July 4 not with a parade of guns, tanks and soldiers who file by the White House in a show of strength and muscle, but with family picnics where kids throw Frisbees, the potato salad gets iffy and the flies die from happiness. You may think you have overeaten, but it's patriotism." - Erma Bombeck

Countless writers have opined on our nation's birth and the way we celebrate it, many of them offering comments more eloquent and seemingly more substantial than Ms. Bombeck. But at this time of turmoil and division, we appreciate both her insight and her sense of humor.

Images of war-torn Ukraine have reminded us over the past four months what military might looks like and the devastation it can wreak, destroying lives and property.

Untold novels have offered insight into the horrors of war as well, with two soon arriving in screenplay form. Kristin Hannah's "The Nightingale," set to be released as a film next year, tells the costs paid by two sisters in German-occupied France during World War II. Anthony Doerr's Pulitzer Prize-winning "All the Light We Cannot See" follows a blind French girl and a German boy whose paths collide in occupied France as they both try to survive the devastation of World War II. It's being adapted into a four-part series for Netflix.

We, of course, are fighting a different kind war in the United States, one that pits people of one political persuasion against those who do not agree and vice-versa. The main weapons in this battle are TV "news" programs and social media, both of which are perfectly designed to ignore actual information in favor of inflammatory statements and extreme opinions designed to induce hate and fear.

This battle has been going on for some time but has come into sharper focus in recent years as the nation has had to come to grips with instances of police brutality, mass shootings and the recent Supreme Court decision.

We forget, it seems, that this nation has survived challenges that threatened to divide us in the past, from the Civil War to the civil rights movement. Our country was founded in a time of bitter disagreement over whether the colonies should remain under British rule or fight for their independence. Each time we have found a way to remain united, if at a cost.

One of the ways each of us can help the country come together is by remembering that individuals are more than just opinions that either contradict or align with our own. They are people, with parents, children, brothers, sisters, aunts, uncles, nieces, nephews. They have their own life stories that have shaped their beliefs. They might be willing to share those stories, if we ask.

One of the best places to start is our own hometown. Even here we find division and disagreement, but also a shared sense of love and respect for the community so many families, individuals, businesses, schools and churches call home.

Here, on Monday, we will line the streets with friends, neighbors and colleagues to watch one of the village's most beloved traditions, the annual Fourth of July parade. We'll put political and religious differences aside and enjoy spending time together as a community.

Later that afternoon, we might gather for cookouts or picnics - where we hope the potato salad is on ice - and then enjoy some fireworks when dusk finally arrives.

We hope everyone will take a moment to be grateful that this wonderful, peaceful, spectacular way is how we celebrate our nation's birth.