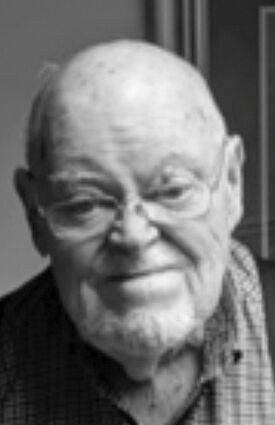 Born in 1931 in Rockford to Ray and Ellen Pierce, Ralph was the fourth of their five children and is survived by his younger sister, Joyce Hobel of Rockford.

As a boy, Ralph grew up near a vacant lot where he and his buddies were always throwing a baseball or football with friends. They formed neighborhood baseball teams and built a diamond with a backstop made of boards and chicken wire and played other neighborhood teams.

In junior and senior high school, Ralph had the lead in several plays, including "The Late Christopher Bean," and also did theater in college. His acting career was put on hold while he raised a family and had a career but was revived late in life as he has enjoyed reading, telling jokes and acting in the Fibber McGee and Molly radio plays in his retirement community.

Ralph graduated from the University of Wisconsin with a bachelor's in business administration in 1953. His first year he attended on a scholarship from West High. Tuition was around $250. The last three years he was able to procure $175 scholarship money from a state representative. Each representative received one scholarship to give to a deserving recipient, usually an athlete. Ralph wrote every state representative and finally got one to sponsor him. To make up the difference, he worked in the cafeteria for $.57 an hour, then as a pin setter in the bowling alley for $1.27 an hour.

Ralph was in the ROTC at West High School in Rockford. He served in the 7th Infantry of the Army Medical Service Corps from 1954-56, spending one year in Korea. While in high school Ralph met Virginia "Ginny" Bergeron, the woman who would become his wife of 63 years. Ralph and Ginny married on June 13, 1953. They lived in Rockford, Chicago, and Park Forest before buying their first house and settling in Hinsdale in 1960. For the next four decades Ralph commuted from the West Hinsdale station on the Burlington route into Chicago where he worked in the Chicago Board of Trade building progressing in his career as an investment banker, specializing in municipal bonds finance. He retired in 1998 from Wayne Hummer.

Throughout their adult lives, Ralph and Ginny were constantly active in their community. Together they served in many roles at Christ Lutheran Church in Clarendon Hills and later attended Redeemer Lutheran Church in Hinsdale. Upon retirement Ralph went to work as a reliable and cheerful volunteer assisting in the blood bank at Good Samaritan Hospital, bringing shut-ins smiles and chit-chat with Meals on Wheels and reading books and magazines for the blind and Montessori preschool in his rich, radio voice.

Ralph's stock and bond market stress reliever was golf and gambling. He enjoyed both every chance he could, including taking gambling junkets to Las Vegas where he would gamble while Ginny went to shows. Right up until the end Ralph enjoyed playing and teaching blackjack and Rummikub with his fellow residents at the Birches Assisted Living Community in Clarendon Hills. He was a lifelong sports fan, starting with the West High Rockford Warriors and the Wisconsin Badgers. He rooted for all the Chicago sports teams, had season tickets to the Bears and Blackhawks for many years, and, in disbelief of his steadfast prediction, did live to see the Cubs win the World Series in 2016.

Ralph was preceded in death by Virginia in 2016.

He is survived by his four children, Rich (Meg), Julie (Dan) Davidson, Jim (Cathy) and Karen (Gary) Burns; his 11 grandchildren; and his three great-grandchildren.

As a US Army veteran, Ralph will be buried at Abraham Lincoln National Cemetery in Elwood Illinois on July 1.

In lieu of flowers memorials may be given online to DuPage Seniors, which sponsors the Meals on Wheels program, at https://www.dupageseniorcouncil.org/meals-on-wheels/