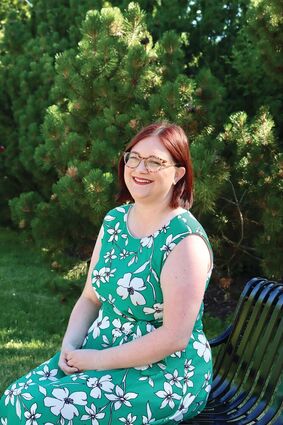 Maggie South, administrative assistant for parks and recreation, said her job is about more than answering phones and planning events. She said a healthy parks and rec department is an important part of a healthy community. (Jim Slonoff photo)

People across the United States look forward to July 4 as a day to spend with family and friends, to relax and to celebrate. But for Maggie South of the Hinsdale Parks and Recreation Department, it's showtime.

Preparations for Hinsdale's annual Fourth of July parade begin in February, South said, and culminate with one of the biggest events of the year for the village where she has worked since November 2018.

"We're there to see that everything goes as smoothly as possible," South, administrative assistant in the parks and recreation department, said of herself and her coworkers.

South was fresh out of college when she accepted a job at the Westmont Park District. The job didn't have much use for her degree in French or her minor in history, both earned at North Central College in Naperville, but after just two years on the job, South said she knew she had found her career path.

"Parks and recreation are so important to everybody. It's an important field to be involved in," said South, who is pursuing a master's degree in recreation and park administration from Central Michigan University.

A phone call to the Hinsdale Parks and Recreation or Finance department likely is answered by South, whose job is to answer questions and direct calls to the right person. She fields questions about everything from an event's start time to parking tickets. But not all of her time is spent on the phone. She also helps to organize and promote local events.

As a member of a small staff, South said she pitches in wherever she's needed. Just before Valentine's Day, she spent her day stuffing hundreds of treat bags and blowing up balloons for the department's Cupid's Courier event. And while the job has yet to make use of her French speaking skills, South said she has learned to use software, how to put together the department's seasonal program brochures and a little bit about everything that goes on in the village.

Back home in Westmont, where she not only worked but has lived most of her life, South spends time helping with events like cruise nights and the Taste of Westmont.

"I spend a lot of time volunteering and doing special events in my hometown," she said.

She also was recruited to write a book chronicling Westmont's 100-year history - a project she completed in early 2021, after two and a half years of work. As that project drew to a close, South said she found herself with extra time and decided to spend it in pursuit of a master's degree. She started classes one week after the book's release.

Though Westmont is just a few miles from South's job, she said she knew very little about Hinsdale before starting work in the village. Since then she's been impressed with the village's respect for local history.

"I didn't realize how deeply rooted in history it was," South said. Speaking of the Zook house, now located at Katherine Legge Memorial Park, South said not every town would load an entire house on a truck to move it to a new, safer location.

South said she enjoys being part of a team that protects local history, but the best part of her job is getting to know the people who call the village home, and the people she works with every day.