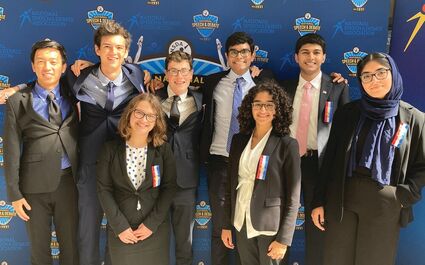 When settling in for a little summer reading, most would turn to a breezy novel or timeless classic. Hinsdale Central's Ajay Gupta prefers something a bit more informative.

"I read The Economist every day," said Gupta, a member of the Hinsdale Central speech team and fourth-place winner in international extemporaneous speaking at this year's National Speech and Debate Tournament in Louisville.

As a competitor in both extemporaneous and impromptu speaking, it's important for Gupta to stay informed of events and issues all over the world. Known as limited preparation events, both require the competitor to compile and deliver a convincing speech just minutes after receiving a topic.

"You basically give a spontaneous speech," said Gupta, a rising senior who has participated in extemporaneous and impromptu speaking since his freshman year.

Gupta's top-three finish at a qualifying tournament in March cleared the way for the Louisville tournament, which took place June 13-17 and attracted 5,000 high school students from 1,194 schools across the country. Gupta made the trip with fellow speech team member Kevin Zhang, six members of the debate team - Sebastian Attlan, Will Schmeltz, Katie Parkins, Shrihan Atluri, Abeeha Mirza and Anya Raman - and Coach Paul Woods. His teammates all competed in preliminary rounds.

After an intense competition that involved 12 speeches over three days, Gupta entered the final round of six on Friday. Given three topics to choose from, he began preparing a speech about the Bing search engine and its ability to compete in the market before turning his attention to an alternative prompt.

His final speech of the competition explored whether India and Pakistan could join forces to battle the impact of the countries' current heat waves. After briefly exploring the search engine question, Gupta said he spent the remainder of his 30-minute preparation period putting together a 7-minute speech explaining why the two countries likely would not come together to address the problem. He even tried to throw in a bit of humor, just to keep the judges and audience engaged.

"I came up with what I thought was a pretty funny joke about Tom Brady and inflation levels," Gupta said of his semi-finals speech. And while it generated some chuckles, he's not ready to venture into original comedy just yet.

To be successful in his chosen speech events, Gupta said he has to know a little about a lot of things. He also has to know where to go to find accurate information quickly.

Unique to the national competition is the opportunity for speakers to cross examine their competition. Each of the six finalists in international extemporaneous speaking was given two minutes to ask questions of the next competitor.

"They try to poke holes in your argument," he said. 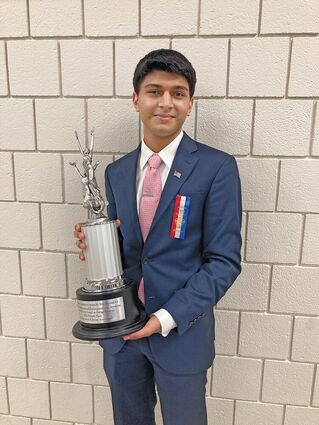 As he prepares to enter his final season as part of the Hinsdale Central team, Gupta remembers the quiet, insecure kid who joined the team freshman year.

"I remember being nervous to make reservations at a restaurant. I'm a lot more confident now," he said.

And whatever he chooses to pursue after high school, Gupta said his experience on the speech team has prepared him.

Woods, who has coached speech for nearly 20 years, agrees. He said past students often tell him how impactful their speech team experience has been and how it prepared them for real life, no matter their chosen field.

"It's the best activity that kids can do while they're in high school," he said.