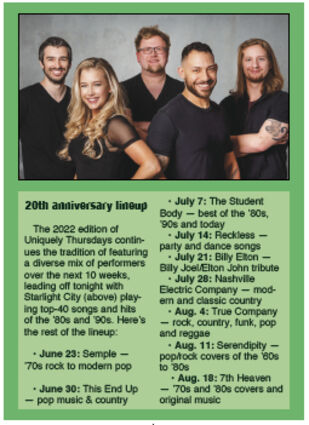 In 2002 the Hinsdale Chamber of Commerce launched a weekly summer series of live concerts in the village's downtown business district in an effort to build community and energize the local economy.

Two decades later, Uniquely Thursdays is part of the seasonal rhythm for residents and nonresidents alike, drawing at times upwards of 1,000 guests to Burlington Park from mid-June to mid-August with great music, food and drinks, and an inviting atmosphere the entire the family can embrace.

The 20th edition of the series kicks off from 6 to 9 tonight, June 16, in the park at 30 E. Chicago Ave. with Starlight City playing covers of hits ranging from Elton John to Panic! At the Disco. The series continues to Aug. 18, with AdventHealth Hinsdale as the presenting sponsor.

"We had a small little six-inch stage that kept getting bigger," Field remarked about the event's evolution. "We just outgrew it."

The event moved south of the tracks in 2008, turning Burlington Park into the place to be every Thursday night.

"It's such a beautiful venue," she said.

And there were no food trucks or wine and beer vendors in those early days, Field noted.

"We had to put the beer in kegs and haul it (to First Street)," she said. "Now we have our own trailer."

The wine and beer stations will be run by chamber member volunteers, who are certified to check IDs and not over-serve. Private alcohol is not permitted at the event.

"We're keeping the same beer and wine selection because they worked," Field said.

She noted that the Uniquely Thursdays logo even got a update in celebration of the milestone anniversary.

Bands were locked in early to ensure a high-quality lineup.

Kate Brassel, lead singer of opening act Starlight City, said the band would be performing its fourth straight Uniquely Thursdays had COVID not put the kibosh on the 2020 season.

"We look forward to this event every year. Words can't begin to express how grateful we were to be back in the saddle in 2021 and look out on a crowd of old friends (and new) singing and dancing the night away," Brassel remarked in an email. "Live music really is the best medicine. We love what we do and sharing it with you!"

Field is expecting strong attendance week in and week out. 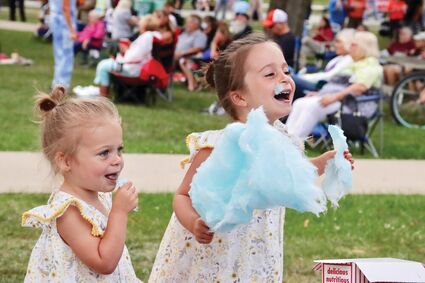 Uniquely Thursdays kicks off its 2022 season tonight, with people expected to fill Hinsdale's Burlington Park for an evening of good music, food, drinks and a fun summertime vibe. (file photo)

"We're hoping to have crowds like last year. A couple nights we had over 1,000 people there," she said, expressing gratitude to the Village of Hinsdale and the police department for its support.

A number of local businesses will staff promotional tables at the events, so guests are encouraged to stop by. Other contributors include Kramer Foods with donations of bottled water and the Hinsdeli at the Shell gas station, which furnishes ice.

"They've been doing it for years for us," Field noted of the two benefactors.

She said seeing familiar faces each year is one of the high notes of Uniquely Thursdays' legacy.

"The member volunteers that sell the (alcohol) tickets and serve the community have made such great relationships with guests," Field related.