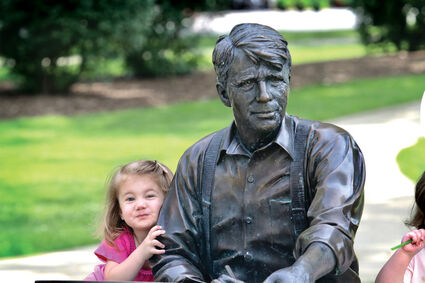 A quick hug for Robert - Ellie Stern visited the Hinsdale Farmers Market Monday morning, along with her grandmother, and stopped by the Robert Frost statue in Burlington Park. The statue "Stopping by Woods on a Snowy Evening" was erected in 1999 to commemorate the 125th anniversary of the village. Currently village leaders are making plans for Hinsdale's 150th anniversary next year. The Farmers Market, sponsored by the Hinsdale Chamber of Commerce, is held from 7 a.m. to 1 p.m. Mondays through Oct. 24. (Jim Slonoff photo)