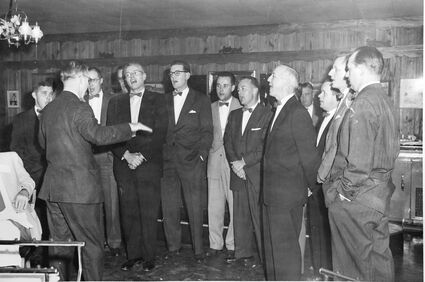 Tuning up - This photo of the Jolly Boys dates back to the early 1950s. The man directing is Scott Jones, founder of the group and a former president of the Princeton Glee Club. In those days, the Jolly Boys all wore the same bow tie as their uniform. Now the group dons its distinctive red jackets. The group is celebrating its 75th anniversary this year. For more on its special anniversary concert, see the story on Page 7. (photo courtesy of Dick Pinto)