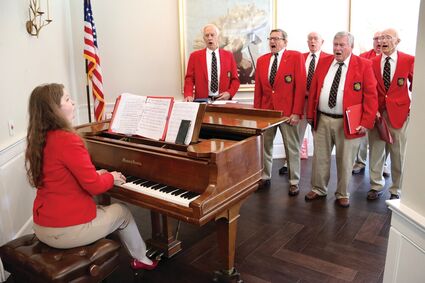 Director Vicki Lowczyk runs through some warm-ups with the Jolly Boys before a May 23 event at Magnolia Senior Living in Hinsdale. Group members are looking forward to celebrating their milestone anniversary at a Tuesday, June 21, concert. (Jim Slonoff photo)

The Jolly Boys have shared their harmonies and love of music with the community for three quarters of a century. They will celebrate this milestone with a fundraising concert Tuesday, June 21, that will showcase 75 years of songs while supporting The Community House of Hinsdale.

Dick Pinto, who has sung with the all-male chorus since 1984, said the Jolly Boys is one of the oldest choral groups in the Chicago area.

Just like every Jolly Boys rehearsal, the concert will begin with "We Meet Again Tonight," followed by classics such as "Aura Lee" and "Lida Rose," featuring a solo by Jolly Boys director Vicki Lowczyk.

"We've been singing that song for probably 75 years," Jolly Boys President Frank Kobes said of the tune from "Music Man."

The Jolly Boys was founded by a group of men who, upon returning from service in World War II, wanted a means of sharing their love of singing, Pinto said. They gathered on Saturday nights at a member's home and soon began performing throughout Hinsdale and the surrounding suburbs.

Along with tunes from the chorus' early years, the anniversary concert will feature a set by the ladies of Cantata, the female counterpart to the Jolly Boys. The two groups will team up for a rendition of "Let's Call the Whole Thing Off."

"It's a lot of Gershwin," Pinto said of the concert program.

Pinto said rehearsing with the Jolly Boys is even more fun than performing.

"We're just doing our thing. We just have a good time singing," he said.

Of course, the pandemic challenged the group's ability to share its music, but it couldn't stop the Jolly Boys from singing, Kobes said. Via Zoom, members began sharing their favorite beer songs, four of which will be featured in a medley as part of the June 21 program.

The group of about 20 men gathers at The Community House every other Thursday from September through June, preparing a holiday program in winter and a spring program after the first of each year. Between the two concerts, the Jolly Boys share their music with groups and retirement communities in and around Hinsdale. For most members, the Jolly Boys is part of their retirement. But members of all ages are welcome. No audition is necessary, although Pinto said some experience is preferred.

The 75th Anniversary Concert is a way for the Jolly Boys to thank The Community House for providing the group with a home, Kobes said. The concert will end with a tribute to the crowd's veterans, Kobes said, followed by "Sleep, Sleep, Sleep."

"It's a beautiful song," Pinto said of the group's traditional send-off.

Over the decades the Jolly Boys have performed for crowds large and small. Pinto remembers singing the national anthem in front of nearly 28,000 people at a White Sox game, as well as a concert in Hinsdale that, due at least in part to a huge snowstorm, attracted just four people.

The show at The Community House no doubt will attract a crowd somewhere in between.

For details on the concert, turn to Page 20.