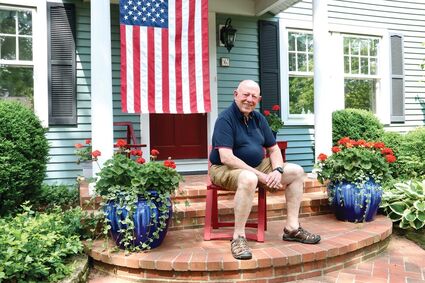 Soon after returning to Hinsdale with his family from a six-year overseas work assignment, Bob Hooks went to pick up some groceries.

"Paper or plastic?" the cashier inquired.

After a bit of back and forth, he finally caught on to the meaning of the question.

"I did a lot of work on nuclear (power plants), primarily," Hooks said of his structural engineering work. "I was a vice president project director by the time I retired."

In 1987 Hooks accepted a transfer to Seoul, South Korea. Their three children attended international school, and he recalled extended family trips to China, Australia and Thailand. He pointed out the Thai elephant chair adorning the living room.

"It was a different culture and we took advantage of it," Hooks said, listing all the nations represented at a birthday party for his daughter Molly.

"We have made lifelong friends," he remarked. "We still get together with some of them a couple times a year. One couple just had their 65th wedding anniversary. Another couple flew in from Denver and we surprised them when we showed up for dinner."

Three months before the family was due to repatriate to the U.S., their youngest child Mark was diagnosed with a rare form of bone cancer. Hooks' sister, an oncology nurse, was there on a visit and had recommended special testing based on his symptoms. Mark was flown to Honolulu by the U.S. Air Force for treatment thanks to the intervention of an officer with whom Hooks had crossed paths.

"I was working in volunteer ski patrol for U.S. Ski Patrol Asia on weekends," he said, "and I had certified this master sergeant in ski patrol."

They eventually returned to Hinsdale and Mark underwent a pioneering bone graft procedure.

"The prognosis on this cancer was 20 percent (survival) for five years," Hooks said.

Hooks and his wife are deeply involved with the Hinsdale United Methodist Church, where he serves as chair of the board of trustees, leveraging his engineering background to oversee facility maintenance projects. He's also a member of the monthly men's club, a top priority on his calendar.

"On the first Friday of every month, we bring a sack lunch and meet over at the church," said Hooks, for whom Father's Day is even sweeter as a grandfather. "It's guys that are mostly retired, and we just get together and chat. Some of it has to do with faith and church, and some of is has to do with the price of gasoline. It's just a fun group, and I enjoy the camaraderie."