Putting the social back in online media 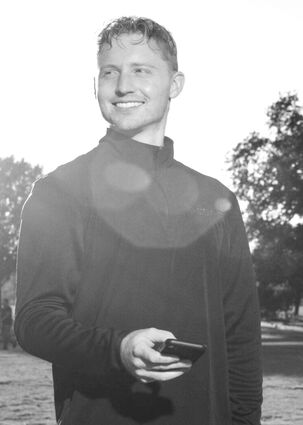 "As long as I'm doing something that is re-engineering backwards systems, I think I'm going to be fulfilled doing it," Floersch said by phone from the Austin, Texas, office of his start-up, Astek Network.

The 2015 Hinsdale Central graduate recently launched the venture, described in company materials as "an altruistic social technology, which combines the original creation, autonomous distribution and equitable consumption of digital assets." The aim is to furnish digital content creators, viewers and developers with a public-facing record of the origin of that content, like an article or photo, to prevent counterfeits.

"Astek technology scrapes every asset living publicly on the internet and blockchain by word or pixel to evaluate how original it is," he said.

He used a mining analogy to explain Astek's role in content curation.

"We're not the ones digging for gold. We're the people building the shovels for the gold-diggers," he said. "What we're creating is a marketplace for buyers of that content. And there, developers can create their own community."

The idea is to empower people to create for themselves and supporters rather than for the large centralized social media networks' algorithm.

Floersch left Hinsdale seven years ago for Emory University in Atlanta, where he found more pleasant winter weather and a fresh calling. As an undergrad he founded STEAK Life Brands, a blogging platform promoting self-improvement for men of the Millennial and Gen Z demographic.

"I saw a need - in my own personal growth - to feature that content."

He also recognized that he needed to acquire skills for building an online brand. After graduating, he headed for the tech-friendly city of Austin to work as a digital marketing consultant. In January he founded Astek.

"I wanted to start something new in a new city just to venture out and put myself in this kind of zone of discomfort, and I think that's where a lot of my growth has come from," said Floersch, who, as CEO, works with his chief financial officer and a team of engineers. "(Austin's) definitely been a great city to build a team and a product in this industry."

His vision of the future is one in which more people will want to own their original content online and not relinquish it to the big social media networks.

"Every single piece of original content you should be able to monetize," he said.

"Our generation is known for asking that question, 'What's in it for me?' " he added. "We're really doing it to provide more decentralized power online. The creation of original content of many should no longer feed the few."

The Astek community will have its own cryptocurrency that claimers can buy, earn and/or trade to purchase assets, support creators and promote original assets.

"Any sort of large network should not be owned by one entity. It should be owned by the community," Floersch said.

Its that spirit of mutual benefit that fuels his work.

"I craved a more purposeful online experience. It's not just enough to accumulate and acquire. What's more important is the impact you have on others," he said, crediting his Central soccer coach Mike Wiggins and others for helping instill those values.

Floersch wants to be a thought leader for a kinder digital world.

"If purpose is not at the core of your business model - helping someone while that business model is functioning - than we're going to be living in a very different place," he said.