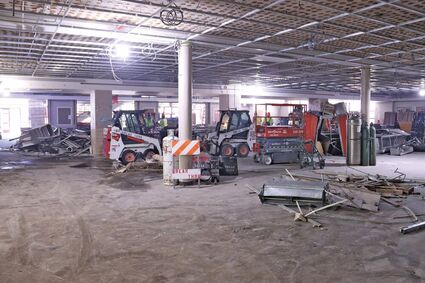 Construction crews are working this summer on the cafeteria, field house and new Grant Street entrance at Hinsdale Central High School. The cafeteria/kitchen renovation is part of Phase 3 of the Future Ready Facilities plan. Even after value engineering, the $20 million worth of Phase 3 projects came in $2.7 million over budget, with prices higher than anticipated due to supply chain issues and labor shortages. (Jim Slonoff photos)

Hinsdale High School District 86 will use $2.7 million from the education fund to cover higher than expected costs for Phase 3 referendum projects.

The school board June 2 agreed to transfer the excess funds, which were generated by corporate replacement tax receipts that came in over budget, unused salaries for some staff positions the district has been unable to fill and travel and supply funds that were not spent due to COVID-19, Josh Stephenson, chief financial officer, told the board. This budget favorability is a one-time occurrence, he noted.

"We've known since the board approved the Phase 3 referendum bids that we would have to move money from the operational fund into the capital projects fund to address the anticipated shortfall due to some of the macroeconomic changes that we've seen with labor and material prices moving in the construction industry," he said.

State law prevents the district from transferring money directly from the education fund to the capital projects fund, so the board agreed to transfer it to the operations and maintenance fund first.

Board member Peggy James asked if Phase 4 projects costs are expected to exceed the budgeted amount as well.

The district has $6.8 million on hand to pay for Phase 4 work, which primarily involves classroom renovations at Central, Stephenson said. He said the district likely will hold some operation funds in reserve as well, as the board has indicated completing referendum projects is a priority.

"I would anticipate that the costs are going to be higher," he said. "The information that we've got, some materials have moved double digits inside of one month. It's significant escalation on a lot of different construction materials."

He pointed out that the project was on budget through the completion of Phase 2 work, before global supply chain issues and nationwide labor shortages increased costs.

"I think the construction team as a whole has done a good job managing the referendum," he said.

The board was required to hold a public hearing on the amended budget and fund transfer, during which some residents complained about the reallocation of funds and higher costs.

Kim Notaro said she wishes the special education department would have been fully staffed at Central this past school year.

"Those dollars that we're talking about now putting into a building could have gone a long way to close some gaps for some kids," she said, noting the lack of resource staff during periods four through eight. "We're not supposed to be spending on bricks and mortar. We're investing in the future, which is kids and learning."

Stephenson said the finances were not an issue in staffing vacancies.

"We didn't hold any vacancies open for financial reasons this past year," he said.

Some speakers also commented on projects that were adding to the original referendum project list.

Board member Debbie Levinthal explained that the district was able to sell bonds at a premium. That and community donation generated about $165.8 million for facilities projects, compared to the $139.8 million bond sale voters approved in April 2019.

"When the bonds were sold at a premium, more projects were added. They were added well before the seven of us were sitting here," Levinthal said.

"I feel like we've been put in kind of a difficult position by the previous board," James said.