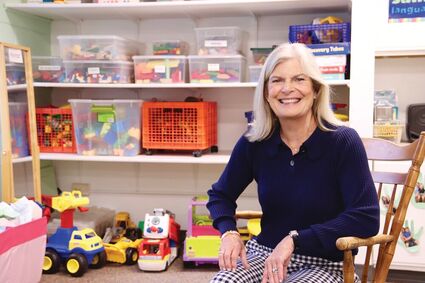 After spending months with a classroom full of 3-year-olds, summer is a particularly quiet time for Kathy Behrens, teaching assistant at Hinsdale Covenant Preschool.

Behrens was a preschooler herself when her family first moved to the village. And while her life has included stints in Texas, Minnesota and London, Hinsdale has always been home, Behrens said. It's where she and husband Chris, a Darien native, raised their three children, and where Behrens found her unexpected but much-loved career.

Behrens' youngest child was in fifth grade when she signed on to substitute at the school that prepared her daughter for kindergarten, Grace Academy in Hinsdale. When the school had an opening for a teacher, Behrens welcomed the opportunity.

"I was lucky enough to get it," she said.

And while it's far from the career in fashion merchandising that Behrens had imagined, it's something she continues to enjoy 17 years later.

Behrens recently finished her second year at Hinsdale Covenant Preschool, where she assists in the 3-year-old classroom three mornings a week. For many children, the first day of preschool is also the first time away from mom and dad - an experience that can be more traumatic for the parents than the child, Behrens said. With just a little comforting and reassurance that their parents will be back soon, Behrens said most children adapt quickly.

"It gets a little easier with each day of school," she said.

Perhaps the most exciting and rewarding part of her job is seeing the progress her students make between August and May. After months of learning that's often disguised as play, Behrens' preschoolers emerge with more confidence, social skills, knowledge of their colors, shapes, numbers and letters and more.

"We teach them fine motor skills, like coloring, cutting and gluing," she said. "Ultimately, we're preparing them for kindergarten."

Because Covenant Preschool is faith based, students also learn Bible stories and the lessons of the church.

Along with the satisfaction of seeing her students learn and grow, Behrens said there's seldom a day that doesn't include moments of laughter.

"They crack me up on a daily basis," she said.

Having raised her own children in the village, Behrens said she enjoys helping other parents who have chosen Hinsdale as their home.

"It's a great community to raise a family," she said.

As Behrens and her students settle into summer break, she has some advice for parents who want to continue their child's progress.

"Read to your kids at home. Go to the library as often as you can," Behrens said.

She also urges parents to find opportunities in their everyday activities to reinforce their child's knowledge by pointing out shapes and colors and by encouraging the recognition of numbers and letters.

Behrens said her own summer will be filled with all the things she enjoys, including family, gardening, pickleball, golf and reading. But by the time August rolls around, she'll be ready to greet a new group of hungry little minds.

"I love being around little people," she said.