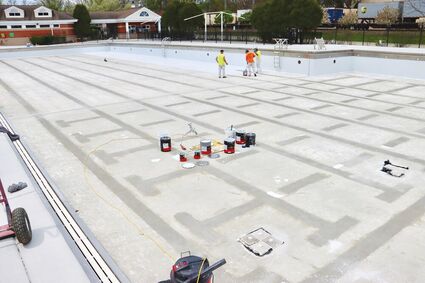 Work on the Hinsdale pool has been underway since last fall and a couple of weeks ago, it seemed the opening might be delayed. Fortunately construction was completed, the paint dried and the pool was able to open Saturday for Memorial Day weekend. Workers from Pecover Decorating Services were putting on the last coating of epoxy when this picture was taken. (Jim Slonoff photos)

The Memorial Day weekend heat wave arrived at just the right time for the opening of the Hinsdale Community Pool.

Heather Bereckis, superintendent of parks and recreation for the village, said attendance built over the course of the first weekend of the season, culminating in the largest group of swimmers and sun seekers on Monday.

"Windy conditions on Saturday kept some people away, so there wasn't as big of a crowd," Bereckis said. "We definitely saw the biggest crowds (on Memorial Day). We were busy the whole day."

In fact, she said it was the highest use day for the pool since before the pandemic.

"We saw a lot of families. Member passes and daily visits were higher than they've been in the past three years," Bereckis reported. "During the three-day weekend, we had over 900 individual visits to the pool."

She said visitors commented on the upgrades the village made during the offseason. The $800,000 in improvements included reconstruction of the lap pool deck, installation of a new filtration system, repainting the pool and putting in new fencing.

"We got a lot of positive feedback on that," Bereckis said.

A full staff was on hand to serve patrons, which has been hard for many aquatic facilities to pull off amidst the tight labor market across the country. Bereckis said her department anticipated the potential challenges in hiring lifeguards and concession stand workers and approached village trustees about increasing compensation levels.

"We were very lucky. We went to the board early on to ask for an increase in our base rate of pay to the $15-an-hour mark," she said, noting that Cook County facilities already were offering that rate. "We were able to entice new staff with that rate, and a lot of previous staff is returning.

"We are comfortably staffed right now," she added.

Pres-season membership sales have been strong, Bereckis said, with more than 1,000 passes sold as of last week.

Bereckis surmised that the pool's ability to be open the last two years when many neighboring pools were closed helped elevate its profile.

"We were one of the only pools open during those years, so a lot more people found out about us," she said. "A staff member told me he knew of people coming from all over the state to our pool because we were able to maintain a safe facility and be open when others weren't."

She said additional improvements to the baby pool and dive pool area slated for the upcoming offseason will continue enhancing the visitor experience. Swim lessons begin once school lets out.

"All of our programming and swim team starts up again next week," Bereckis said.

There's plenty to look forward to after an ideal season kick-off.

"It was a nice, uneventful opening weekend," she said.