Friendship at the heart of musical - and of its cast 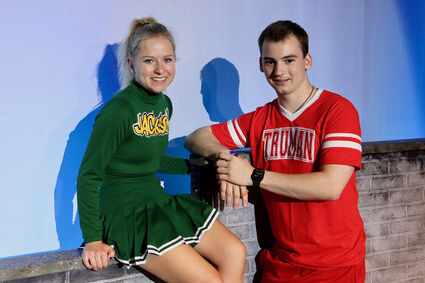 For recent Hinsdale Central graduates and Stage Door Fine Arts veterans Sam Romberger and Hannah Turek, exhaustive research was not required for their upcoming roles - as high school students seeking true friendship in "Bring It On!"

"This is the show we're ending our high school careers with, and we're about to go off to college into a whole new world of people," Romberger said of the parallels to their own reality.

That's not to say preparation wasn't required for the cheer-centered "Bring It On!" which opens next week at The Community House (see Page 22 for details).

"This show has really forced me to get in shape," Turek said of the high-flying choreography. "It's pushed me to my limits."

"I've been able to do things that I definitely did not think I'd ever do," he said.

Turek plays Campbell, a senior cheerleader aspiring to captain her Truman High School squad. Suddenly she is redistricted to Jackson High, turning her life upside down.

"The show is based on her going through this journey of meeting other people at Jackson and her friendships at Truman," Turek said.

The production marks the end of both actors' SDFA careers, capping a decade of performances. And they couldn't imagine a better way to close the curtain.

"This is probably the favorite show we've done," Romberger said. "It's definitely the most intense show."

"This show is truly so physically demanding, and it won't work unless we work as a team," Turek said.

As they ready their parts, they've relished the chance to support and mentor the grade-school cast of SDFA's "Descendants: The Musical," which opens today.

"Over the years I've become more interested and involved in the technical side," said Romberger, who's overseeing lighting for the production. "Being able to put on the show for these kids is fun."

Turek reflected on her fledgling start in theater, which grew into a passion.

"I remember being super-little and looking up to a lot of the older kids," said Turek, who's serving as a backstage helper. "It's cool to see it come full circle."

"Newsies" and "Mamma Mia!" are among their other top shows over the years. They both said acting has helped instill a confidence and poise that has aided them in other ways.

"This has been my backbone through high school," Turek said. "This has always been such a safe and accepting place to just be myself."

Romberger said it's also illuminated the importance of teamwork.

"There has to be so much trust, especially with these stunts that are happening," he said of "Bring It On!"

Whether as cast member, tech crew or audience member, the two said their connection with live theater will extend beyond their Hinsdale-based roots.

"It's part of who we are," Romberger said.

"It's going to be fun to watch, but it's even more fun to perform," Turek said.