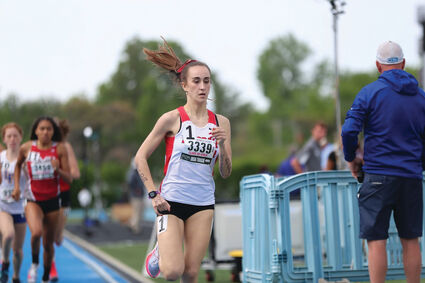 Hinsdale Central's Catie McCabe strides her way to a runner-up finish in the finals of the 800-meter run at the IHSA state championships Saturday, It was McCabe's second all-state performance in two years. Joining her in earning all-state honors was fellow junior Elyssa Chandler, who placed seventh in the 300-meter low hurdles, the best performance in the event by a Central runner since 2008. (photos provided)

Chandler's time of 46.53, clocked in a steady rain, was her second fastest time of the season after running 46.37 at the sectional meet. She became Central's first state qualifier in the event since 2008 and only the fourth all-stater in the 300-meter hurdles in school history.

"I think that is partly because not a lot of people are thrilled about having to run almost an entire lap over hurdles the whole way," she said humbly. "It's a really big meet, and this is one not to mess up."

"She's a very focused young lady. She's pedals to the floor and she goes," Richards said. "She's never completely satisfied, which is a good thing."

That quality came through in her comments, in which she expressed muted satisfaction.

"No race is ever going to be perfect, but sometimes it's just OK to celebrate," Chandler said of her first state meet performance. "That doesn't mean I don't have things to work on this summer."

McCabe, on the other hand, was competing in her second straight state championship, finishing fourth in the 1,600-meter run last year and setting a school record in the process. This season McCabe and her dad/coach Mark McCabe wanted to try the 800.

"During indoor track season I had run a lot of 800s, and I was really starting to like that race, so I thought it would be fun to carry it through the end of the year," she said.

The 2021 state meet was also hit with weather delays, which helped McCabe navigate the stops and starts of last weekend's similarly fluid schedule. She just committed to closing out her junior campaign strong, which she accomplished in a time of 2:14.21 - her best of the season and the best placement for a Red Devil in the event in 20 years. She also is the first Red Devil to earn all-state in both the 800 and 1,600.

"I didn't have a specific goal time-wise, but I ran my season best, so that was exciting," McCabe said. I knew I wanted to try and get into the top four or top three. I was definitely excited about my performance."

Her dad said Catie was not phased by the shifting schedule.

"It was very fortuitous this year that she'd been through that before, just the uncertainty and planning and when to eat," Mark McCabe said of the importance of runner's routine. "Catie is first and foremost a gamer, a competitor, and on the biggest stages she rises to the occasion."

He said Catie ran according to the strategy they laid out and were even able to get a measure of revenge on the third-place runner who had edged out Catie in the indoor season.

"She does everything she needs to do to put herself in her best position," Mark McCabe said.

"Sarah dropped her 3,200 time this year by almost 50 seconds," he said. "She's made a huge step up this year. She's going to be a force in terms of what she's getting ready to do."

Richards said the team, which also included the 4x100- and 4x400-meter relay teams that exited after the preliminaries, tried keep hydrated and stay in the right frame of mind during the weather disruptions. 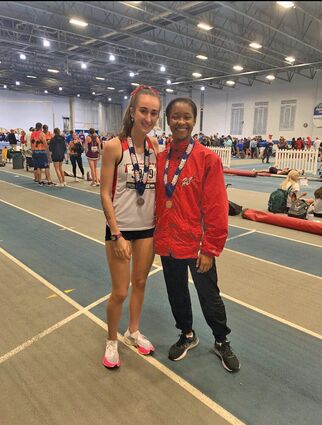 "We had to wait in the fieldhouse, and it's pretty warm in there," he said. "When you're in the fieldhouse, you can't hear what's going on outside. You can't get to your event too early, and if they check in late, they don't run.

"I think the biggest thing is the timing with their warm-ups," Richards added, attributing some of relay team baton hand-off challenges in part to Friday's windy conditions.

Chandler, who was also a member of both relays, said she was disappointed those foursomes didn't reach the finals.

"I wanted to go to finals with my team. I do feel most comfortable when I'm running with my relays," she said.

Chandler looks forward to continuing to perfect her technique this summer on her club team, with an expectation to be among the finalists in the 2023 state meet.

"Mark it on your calendar," she said.