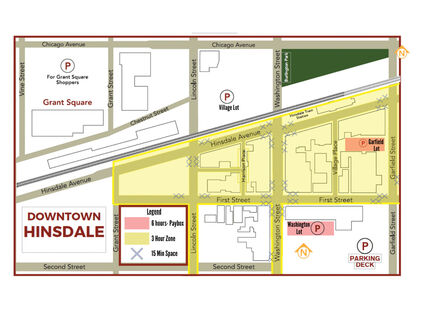 The area highlighted in yellow shows the new three-hour parking zone that will go into effect Wednesday, June. 1. Violators will receive a $25 ticket. (map provided)

The need to forage for loose change in order to park on downtown Hinsdale streets will soon be in the rearview mirror.

"The meters have never been an effective deterrent in creating turnover in the CBD," Trustee Luke Stifflear said at an April 12 board meeting. "Consultants estimate that up to 30 percent of the metered parking spaces are taken by merchants or their employees."

Part of the problem, he said, was the low 25-cent-an-hour fee, a rate more reflective of when the meters were first installed nearly half a century ago in 1973.

The three-hour daily limit, which will be in effect from 7 a.m. to 6 p.m. Monday through Saturday, is an increase by one hour over the maximum meter stay. It will be enforced by license plate reading technology mounted to Hinsdale squad cars. Police Chief Brian King commented that patrons have been forced to either move their car after two hours or risk getting a citation and that the expanded time frame will be more visitor friendly.

"It is designed to provide enough time for a shopper to complete more than one task without moving their vehicle," King said.

The meters will be covered with bags until the time they can be removed.

Because the three-hour-limit starts from the first plate reading, officials raised the issue of someone making multiple trips to and from town possibly getting a ticket even though the total time parked does not add up to three hours. King said that person could appeal the ticket, but he said such cases are rare based on past experience.

"That was one of our big concerns, and it just never happened," King told trustees.

Customers who need additional time can park in the parking deck for free with no time limit. The lots

on Washington Street and Garfield Avenue offer six-hour parking for $1 an hour (the rate is increasing for the Washington lot). 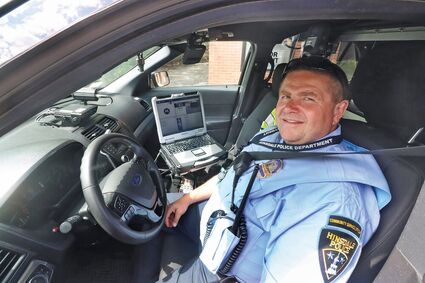 The village also has established 15-minute time zones near shops where take-out is common.

Violators who spend more than three hours parked in the zone will be issued a $25 ticket.

"We haven't projected any additional revenue from raising the ticket price to $25," Cauley said. "We just don't really know how that's going to work."

The meters have generated as much as $260,000 a year in 2019 and as little as $120,000 in 2020, But officials expect increases to the Washington lot parking rate and the village vehicle sticker fee to offset that loss, along with an boost in sales and food and beverage taxes from a more parking-friendly system.

King reported that signs have been installed to notify drivers of the three-hour limit, and parking ambassadors will be out to help with the transition.