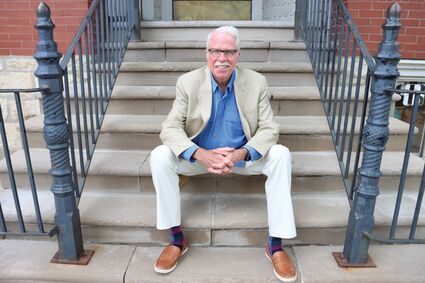 Hinsdale's Bob Barr established Operation Deployed to furnish U.S. military personnel with creature comforts in the midst of stressful environments. Now he's leveraging his network to bring relief to those impacted by the war in Ukraine. (Jim Slonoff photo)

How can people help the Ukrainian people?

When COVID-19 forced Americans to embrace home entertainment like never before, U.S. soldiers serving overseas didn't have the luxury of such a retreat.

Hinsdale's Bob Barr, hearing of the need from military chaplain contacts made through his Operation Deployed nonprofit, knew just the ticket.

From brats to grills to collapsible fans for field hospitals, whatever the need, Barr has found a way to deliver for the troops.

"I'm like a care package concierge service," he quipped.

A new mission emerged with Russia's invasion of Ukraine earlier this year. Barr launched Operation Deployed: Ukrainian Response to raise $100,000 for medical supplies for the Ukrainian army as well as resources for refugee families in neighboring Poland. The drive runs through June 6 (see Page 24 for details on how to contribute), and he received a matching grant for the first $50,000. Among the beneficiaries are 108 Ukrainian orphans ages 3-18.

"One of the things they needed was playground equipment. So we bought $3,000 worth of items so the kids could have a place to (play)," he said. "We rely on the local teams to assess what's needed. I then see if I can fund it or resource it, and then I send it."

Barr said his military contacts as well as civilian teams ensure the goods get to their intended destination.

"We know where our dollars go, and we know the people that are taking what we're giving and making something happen," he said.

Barr launched Operation Deployed in 2014 when a friend suggested he work with military chaplains to meet service members' needs that go beyond standard government provisions. Now working with more than 55 units worldwide, the Operation Deployed outreach helps open doors for the chaplains to extend soul care. The brat cookouts are popular, and Barr also sends packs of cigars for an initiative he's tabbed Holy Smokes.

"These are programs that create a time and space for an interaction to occur, and chaplains can take the conversation wherever it goes," Barr said.

Movie nights have clearly hit the target as confirmed by this note of thanks Barr received from a chaplain aboard a destroyer.

"The ship is small, and you wake up every day in the same place, to walk the same passage ways to do the same work among the same people," he wrote. "When we get them together, whether in big or small groups, just to pop some popcorn and enjoy some screen time together, it is amazing to see some of the stress melt away as they begin to lose themselves in the world of fiction and entertainment.

"Movie Nights are a big part of helping Sailors "escape" the confines of their daily routines," the note continued. "At the end, most people are asking, 'When's the next one?' "