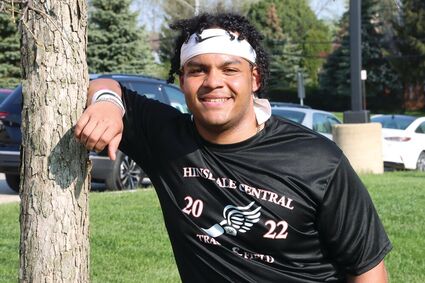 What were your goals coming to this track & field season?

Qualifying for state in the discus. With the qualifying distance at 152 (feet), I've got some work to do. I think I can do it. That's the biggest goal for me.

When did you start throwing competitively?

I started my freshman year toward the end of the indoor season. The coach told me I should do it, and I'd never done it before. I was like, "Why not?"

How have you improved over the years?

At first I was throwing shot like a baseball. With discus, after I got the technique down and learned to spin, that's when I started having fun. I know guys that are not as strong as me but they can throw it longer because of their technique.

I hope they describe as someone they look up to and that I'm a hard worker.

As an underclassmen, what did upperclassmen impress upon you?

Just hold each other accountable, and that you're getting out of it what you put in.

I go through my same warmup and routine, and I like to listen to music - like "Black Dog" by Led Zeppelin - before I throw. I wear the same headband at every meet that I've been wearing since freshman year.

As a football player, how does throwing help your game?

It helps me be more explosive, open my hips and improve my mobility.

Where are you heading in the fall?

College of DuPage to play football.

Anything else people should know?

I'm a really empathetic guy. I'm not as scary as I seem.

Why does coach Jim Westphal like having Narcisse on the team?

Josh is a tremendous hard worker, team leader and excellent student. We consider Josh a "program guy" for his energy and commitment to the track & field program. He has been a two sport athlete (football and track and field) all four years and is a great role model to the younger kids. Josh leads by his hard work and commitment to improve each day and does so with such a positive and even keeled temperament.