Gymnasts are 7th, badminton is 12th 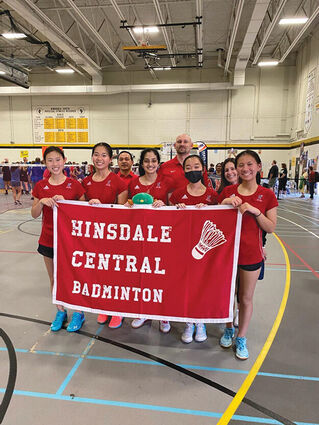 Palatine captured the championship with 164.85 points.

Cihlar said he went to the state meet Friday and Saturday at Hoffman Estates High School with an open mind.

"I knew that I was in a pretty good position based off of my sectional scores," he said. "I just basically wanted to get to the finals and see how it goes from there. I knew there were a ton of really good kids, so I wasn't expecting to medal."

Yet medal he did, placing fifth in parallel bars with a score of 9.5.

"That was the one event that has been pretty consistent all year," he said. "I figured if I did what I had been doing the rest of the year and did a consistent routine, that would be my best chance of medaling."

He also placed seventh in vault and 10th on still rings (see Page 48 for full results). The toughest event was pommel horse, he noted.

"My whole career was just battling that event and it continued in the state meet," he said. "That one especially is always rather difficult."

After making it to the state meet as an individual his freshman and junior years, he was happy to have the entire team qualify this year. Seniors Sojum Banerjee, Chris Reyes and Connor Schwarz and sophomores Marc Cihlar and Nikolas Theotokis also competed.

"I think the best part for me was walking out with all of my friends on the team as a team for the first time," he said. "It's definitely a very different atmosphere when you're going there for a team rather than individual competition. It makes it seem a lot more important. You're representing your whole school, not just yourself."

Coach CJ Johnson said he was extremely happy with how the team performed. His only disappointment was coming in 1/10 of a point behind Downers Grove North.

"As far as my athletes were concerned, they did their all," he said. "We went all out. We didn't hold back on tricks. We made a couple of mistakes. Thats what cost us the 1/10th."

"I wanted them to come out of it with a good competition and do their very best and I think they did that," he said. "You can't get closer than 1/10th of a point to a team."

The Central girls badminton team came in 12th place at the state meet at Hinsdale South High School with 6 points. Stevenson came in first with 16 points.

Coach Serge Penksik said he went in without preconceived ideas of how the team would place.

"Personally for me, the expectation was that we're going to play to the best of our ability," he said. "That's the conversation I had with the girls. It doesn't really matter who shows up on the other side of the court because ultimately you have to play, they have to play, and basically the mindset was control what you can control because you cannot control your opponent."

None of the Red Devils - Jessica Han and Maria Jiao at first and second singles and Ivy Shen/Aishvarya Godla and Tiffany Tu/Hannah Fang and first and second doubles - were seeded, Penksik noted.

"We knew we were going to come across some of the seeded players very quickly - and we did," he said.

Tu and Fang, both freshmen, beat Thornton Fractional South in a close match 21-18, 21-16. Han and Jiao beat their first opponents as well.

Penksik said Jiao, a sophomore who played doubles half of the season, played really well.

"Maria showed to me that she has this quiet kind of grit about her. She's willing to compete to the end. No matter where it is in the match, she's trying to play up to the last point. To me, I think that she really surpassed my expectations at the state level. She definitely surprised me with how much competitiveness she showed and how much technique and ability she showed."

Shen and Godla started off with a tough match in the opening round.

I know that they really wanted that one because they've seen the Downers Grove North team quite a bit," Penksik said.

After that disappointing loss, Godla said she worried she and Shen would have trouble recovering. Her partner offered helpful words of reassurance, and she took a step back.

" 'Hey, this is my senior year,' " she recalls telling herself. " 'Let's focus on the positive moments and not what we messed up on.' "

She and Shen went on to win their next three matches, ultimately losing the fourth round consolation match to girls from Neuqua Valley with whom Godla has trained. She said that match will be one of her best memories from state. 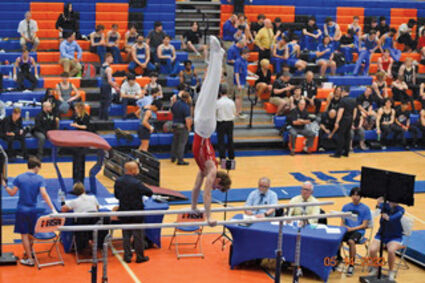 Matthew Cihlar earned his highest finish - fifth place - on parallel bars at the state meet. He also placed in the top 10 in two other events and was 11th in the all-around competition. (photo courtesy of Kathie Cihlar)

"It was a pleasure playing against them," she said.

Penksik said the girls were disappointed that no one made it to the quarterfinals, but noted the team is quite young.

"We only have one senior and we only had one returning state contender," he said. "This was very new to our team. They had a great time learning what a state tournament is."

Penksik said he was impressed with the girls' decision to stay on Saturday to watch the championship matches.

"That shows me seriousness," he said. "They are thinking about moving forward and thinking about what they need to do off-season to eventually come and compete at that level."

Godla said watching the singles and doubles title matches is something she will never forget.

"It was just amazing being able to see the speed at which the birdie was moving," she said. "The defense, the offense, was impeccable. It had us all on the edge of our seats."