All aboard! Ride back in time at depot 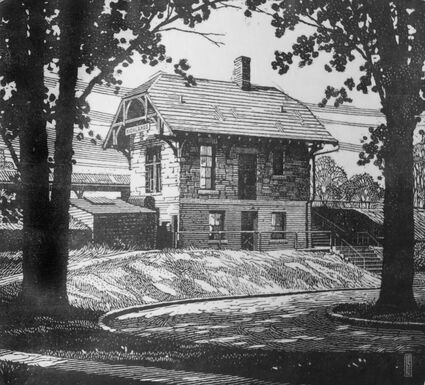 This 1967 etching by Harlan Scheffler shows the Highlands Station in its early days, with a gravel drive for passengers and adjacent storage sheds. A locomotive steams past Highlands Station in this undated shot looking east. (photos courtesy of the Hinsdale Historical Society)

Hinsdale may straddle the county line, but it was the train line that truly put the village on the map.

The mid-19th-century decision by Chicago, Burlington & Quincy Railroad officials to run its railroad through the fledgling town instead of the more established Fullersburg one mile to the north was the beginning of the suburb residents know today.

The downtown business district flourished near the main station. But well-heeled residents on the outskirts wanted closer access points to and from Chicago. In his book "Village on the County Line," historian Hugh Duggan reveals how a couple of families living on the eastern edge of the community took rail transportation matters into their own hands.

"Shortly after the Chicago fire, Mr. Alanson Reed, and his son John W. Reed (Reed's Temple of Music), whose property had been destroyed in that disaster, bought most of the land which comprises the north side of the Highlands," it reads. "The H.L. Story family (Story & Clark pianos) had erected a large house immediately to the south of the railroad. The Burlington could not build a station to serve only three families, but agreed to stop its trains there, on signal."

It's not clear why music industry proprietors seemed drawn to the area, but they appreciated the CB&Q's accommodation and made their own instrumental investment. "In 1873, grateful homeowners built the stone station, naming it 'Highlands' for it's elevated location," Sandy Williams notes in her book, "Hinsdale."

The small one-room limestone station was equipped with electricity in 1916, and an oil burning furnace was removed decades ago. The distinctive structure even inspired a smaller version for model train enthusiasts to add to their collection.

"The Finest O Scale Structure Ever Made," proclaims the ad copy in the archives of the Hinsdale Historical Society before misspelling it "Highland" station. An online search found one for sale on eBay for $45.

The Story property later was acquired by the village and became Highland Park, a serene wooded approach to the station's elevated perch. Resident George Kanary has treasured that bucolic scene since he moved to town 55 years ago.

"It's cute. Architecturally it's different than anything also the Burlington," said the railroad aficionado. "It's quite a spot for people like myself that like to photograph trains."

He remembered when every local train used to stop there. Now passengers can only board at between 4 and 9 a.m. and alight between 3:51 and 7:31 p.m. Monday to Friday. Weekend trains just fly by.

The bottom of the two-floor building used to serve as living quarters for train personnel.

"A signal maintainer and foreman lived there until he married," Kanary said. "Then a young couple moved in there.

"It's kind of tight," he remarked.

The station has not been inhabited since the 1980s, when it underwent a major overhaul with the help of state and federal grants. Just in time for its 150th birthday - an anniversary it shares with the village's founding - the village is scheduled to carry out a $225,000 facelift in 2023 thanks to a Metra grant. The work will include repairs to the ornate wood framing and the roof and gutters, tuckpointing of the distinctive limestone and a new door and frame. 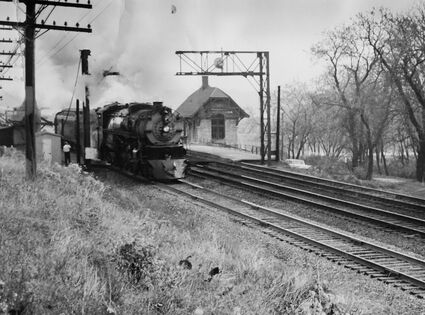 The inside is pretty spartan, with a wooden bench that Kanary said gets moved outside during the summer, and a machine for parking payments. In keeping with the vintage style, a wooden "Highlands" sign hangs from the south facade. Historic photos indicate station signs have adorned every side of the building over the course of the last century and a half.

Before he retired, Kanary would take the train downtown when business necessitated. He's also had a friend visit him from California, riding the tracks all the way from the west coast practically to Kanary's door.

"He said, 'I can't believe it!' " Kanary related of when his friend stepped off and saw the tiny station. "He was used to air travel."

Highlands Station is a draw for those who discover it.

"There are quite a number of people who are not train enthusiasts who like to go there to see the trains and bring their kids," he said.

Thankfully generations can continue to appreciate this jewel on the rails.