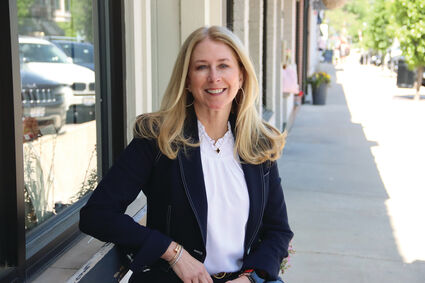 Whether buying or selling, Compass' Tracy Anderson said finding a local agent with knowledge of the community can make the emotional process of moving easier. (Jim Slonoff photo)

As a real estate broker, Tracy Anderson's job isn't only to help clients buy and sell their houses. She's also an emotional navigator, creating a clear and steady path for buyers and sellers alike.

"My job is to take out some of the highs and lows," Anderson said of the emotional journey that often comes with buying or selling a home.

A real estate agent since 2006, Anderson became a founding broker at Compass Real Estate in Hinsdale in 2018.

Anderson was an attorney before stepping away from her career to care for her growing family. When the time came to re-enter the workforce, Anderson said she wanted a job that allowed her to stay close to home. Real estate fit that bill while also allowing her to put some of her legal knowledge and related skills to work.

"A law degree prepares you for everything in real estate - and in most other careers," Anderson said. Problem solving and negotiation are important to both fields, she said, and knowledge of a deal's legal aspects can be an advantage.

"I can't advise as a client's attorney because it's a conflict of interest, but the understanding of it is a big benefit," Anderson said.

As with any new career, the beginning was tough for Anderson. She said it was made even tougher when the 2008 housing market hit just two years later. She said it turned out to be a good learning experience that prepared her to succeed in good times and bad.

A native of Western Springs, Anderson has lived in Hinsdale since 2000. She said her knowledge of the community is a big advantage not only in helping buyers find the right neighborhood, but in helping them to see the potential resale value of a home. Anderson said she wants to find clients a home that not only suits their needs today, but that will help to prepare them for tomorrow.

Anderson is getting a bit of firsthand experience as a buyer and a seller as she prepares to move her family to its third Hinsdale home. In the current Hinsdale market, she said, sellers have the ability to make demands. But that doesn't mean that sellers shouldn't take steps to prepare their homes for potential buyers. Decluttering, replacing bright colors with neutrals and removing personal items such as family photos can help buyers see themselves in your home.

"The people are supposed to be picturing themselves in this space. You want them to see the space, not your stuff," she said.

Anderson said the best part of her job is the variety. No two days are alike, and she enjoys meeting new people and helping them to make one of life's biggest decisions.

"They're going to raise a family and at least make memories there," she said. "I get to be part of that."