Graduation speaker eager to be part of finale 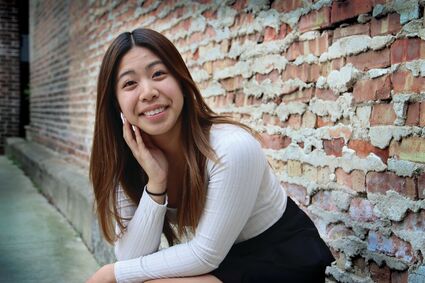 Hinsdale Central senior Maurice Tobiano's transition to high school was complicated by transition to a new home in a new community.

"I only knew like a couple people from swimming," she said. "I went in blind. It was a little scary at first."

Tobiano soon discovered that Red Devil Nation was a welcoming place comprised of broader ethnic representation than she had previously experienced.

"I just remember being very impressed by the diversity," she related. "I was one of, I think, three Asian kids in my elementary school. So going into a classroom and seeing that much diversity for the first time, it was very surreal. It was shocking."

Tobiano was selected to address her classmates at Central's graduation ceremony Thursday, May 26. She's embracing the opportunity to share what she's learned on her journey.

"I'm very excited about it," she said. "I'm really big on school spirit, so I just felt like it was only fitting that I say my piece about what I've experienced here."

Entering freshman year with the intention of ultimately pursuing an engineering career, Tobiano figured the math team would be a good fit. It turned out to be a bit of a miscalculation.

"At Central, there are so many impressive kids, so many geniuses out there, and I realized that math is not really my strong suit," she said with a laugh.

She then found Varsity Club, which helps plan big student events like Homecoming.

"I've been in it ever since," she said. "I got to be co-president (this year) with one of my friends that I met in freshman year pre-engineering class."

The pandemic, of course, cramped the school social scene.

"It was hard at first to get the community to be excited for school when there was no school to, technically, go to. Everything was online," Tobiano said.

The club pivoted to Internet-based activities, and the relative lull gave club leadership space to make sure their senior year celebrations were epic.

"We got our Homecoming, we got our prom and we're getting our graduation in person," Tobiano said. "Our class was very, very lucky with the whole situation."

Another of her Central extracurriculars has been Peer Leadership, a group whose members serve as mentors to ease new students to the school. This proved to be a major task after so much remote learning.

"They'd never experienced a full year of high school without the chaos," she said

Tobiano has sensed her confidence grow over the last four years.

"I've become more open to expressing myself," she said. "I started to speak up more, and I realized that a lot of people were thinking the same things as me."

A business law class junior year reoriented Tobiano's career vision to the legal field. She'll head to University of Michigan in the fall to study history and pre-law.

She noted the class of 2022's adoption of #grit as its motto, signifying resilience in the face of adversity.

"One thing that's very special about our class is that, through it all, we stayed determined.

"It went by very quickly," she added. "I just woke up one morning and it was senior year. It's not hitting me yet, to be honest."