Draft lives up to Kramer's dreams 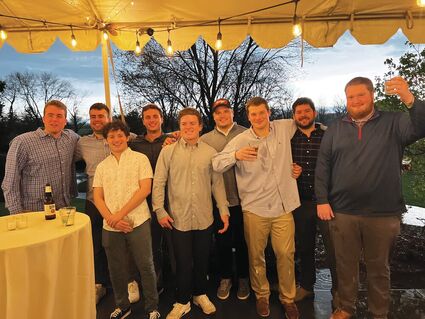 Hinsdale's Doug Kramer (in Bears hat) celebrates being drafted by the Chicago Bears on April 30 with a group of former Hinsdale Central teammates (left photo) and former University of Illinois teammates, including fellow pro offensive linemen Nick Allegretti of the Kansas City Chiefs (second from right) and Kendrick Green of the Pittsburgh Steelers (right). (photos courtesy of Kramer family)

Doug Kramer knew that if he was going to hear his name called during the 2022 NFL draft April 28-30, it would be in the later rounds on day three.

"I knew it was a possibility, but obviously anything can happen," said the standout University of Illinois center by phone this week. "It's hard to have expectations for where you're going to go."

After watching rounds 1, 2 and 3 on the first two days mostly by himself at his family's Hinsdale home, Kramer wanted his squad of loved ones and close friends with him for the finale. He had talked with several teams leading up to the draft, including his childhood favorite Chicago Bears, but there had been no commitments.

"You don't want to get your hopes up. You kind of just sit there and wait for the call. A lot of things are going through your head," Kramer related, citing the one-on-one interviews and pre-draft workouts as nagging subjects of second-guessing. "You have the understanding that it's kind of out of your control at that point. You have to let the chips fall."

During round 6, Kramer's phone rang. The caller ID read "Lake Forest." He answered and heard the voice of Bears head coach Matt Eberflus informing him the team would be selecting him with 207th pick in the draft.

"I was in shock a little, for sure, that it was happening," Kramer said. "You've dreamed of getting that call your entire life. And when it turns out to be the team you've rooted for your entire life, it's definitely a surreal moment."

Kramer's assemblage, though, had no idea to whom he was talking. He turned and uttered "Bears." The eruption of unbridled joy in response has gone viral on the Internet.

"They lost it at that point," he said.

Once the pick was officially announced, his phone really got a workout.

"A number of people who have been a part of my life reached out and texted," he said. "That was really cool just seeing all those messages from people who played a huge role in my life, helping get me to that point."

That included former Hinsdale Central class of 2016 teammates and even Hinsdale Falcons coaches from his youth football days.

"You definitely think about all the moments when you were playing out in the park near Madison (School) just with your buddies, and everyone's got Bears jerseys on," Kramer said.

Doug's dad Doug Sr., said the fact that his son would be trading his Illini orange and blue for the Bears' blue and orange

was hard to fathom.

"It's an incredible accomplishment to just be drafted, but to the Bears, that is crazy and it still doesn't feel real," he said via email, expressing thanks to family and friends as well as Doug for bringing them along for the ride.

"I am stunned, thrilled and think he's so deserving because he works so hard! Still cannot believe it's real," she commented.

Reaching the highest levels of the sport was in his sights from a young age, Kramer said. Hinsdale Central head football coach Brian Griffin, who was Kramer's sophomore coach, remembered his wife, Kelly, sharing Kramer's declared aspiration when she had him in her freshman math class.

"He told her was going to play football at the U of I," Griffin related.

Kramer reached that goal thanks to his unrelenting drive and focus, Griffin suggested, the same drive that impressed pro scouts.

"He's such an awesome person with character and integrity," he said. "This has been something that he really had to put the time and effort into."

"You take a little personal pride in it," he said. "Him being part of the Red Devil family, another one of our kids to go on to do great things - and athletics is just one of them - is cool."

Being a Bear meant Kramer had to ready himself for the team's rookie minicamp, which was held last Friday, Saturday and Sunday.

"It was awesome. I was fired up and ready to get into the playbook and get the whole process going," Kramer said of the camp. "I was super excited to get to Halas Hall and put in the work that needed to be put in." 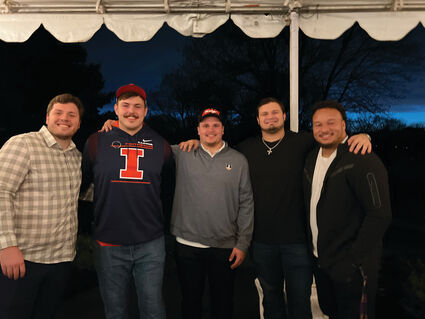 He maintained a rigorous off-season strength and fitness regimen to ensure he was ready to put in the work. During a press conference at the close of camp, Kramer told reporters he appreciates the franchise's legacy.

"I know what the logo means to so many people in this city," he said, listing Brian Urlacher, Devin Hester and Olin Kreutz among his favorite childhood players.

Kramer said Hinsdale means a lot to him, too.

"It was where I grew up, and the town really helped me as a person and has played a huge role in my life," he said before adding, "I hope the Red Devils have a great season."

Red Devil fans now have even more cause to support the Monsters of the Midway.

"Whatever gets thrown at me, at the end of the day I just want to help the team win," Kramer said. "Bear down!"