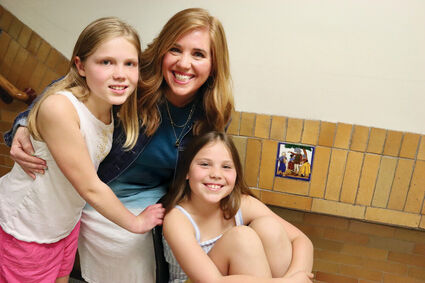 Susie Thorpe and her daughters, Lyla (left) and Kiera pose near the ceramic tiles in that tell the story of Don Quixote. Teachers point them out to students today as they did in Thorpe's day. (Jim Slonoff photo)

Almost 100 years ago, the first students walked to their first day of classes at Monroe School.

"It was a great and important day in 1928 when the pupils in Maple School packed their books and made the pilgrimage over to their beautiful new building, the Monroe School," Marie Loomis, former principal, reminisced in a document from the Hinsdale Historical Society files dated March 26, 1973.

Enrollment in Hinsdale was growing rapidly at the time. In the fall of 1925, the year Madison School opened, the student body numbered 1,115, up 100 from the previous years. Voters approved a bond sale referendum 181-9 to fund construction of the building.

"There was space too for all the pupils from the Fullersburg School, who traveled to Monroe in big buses. There were two rooms of each grade from kindergarten to sixth grade," Loomis said.

The original Tudor Revival building, designed by architects Childs and Smith, has been preserved as the school has been added onto over the years.

"It's so neat to have the original wing of our building," current Principal Kristin Reingruber said, noting the pointed archways and the original tile floor in what used to be the main entrance of the school.

"They are so many cool little unique details. It's so great to know they've been preserved over the years," she said.

Among those details are small, square ceramic tiles that line both sides of the stairway up to the second floor.

"There are some really cool hand-painted tiles that tell the story of Don Quixote. I remember looking at those tiles as a student but not knowing what they told the story of," said Susan Thorpe, who attended Monroe from 1986-92 and is the mom of two current students, Lyla and Kiera, and Luca, who will be in kindergarten next year.

"They didn't sink in, but now it's really cool to see them and see the significance of the storytelling," she said.

She remembers the feeling of entering the foyer through the front doors when she was a student. So does John Haarlow, who attended Monroe in the 1980s.

"What strikes me about the historic aspect of the building is just that grand entryway," he said. "When I was a kid, you would go through the main front doors and you would walk into this huge front atrium that looks the same today. It feels smaller now that I'm over 6 feet tall."

Of course the building has been added on to and classrooms look different than they did in the early days. A reflection by Bette-Anne Dentler Waddell in a 1994 special section of The Suburban Life newspaper, on file at the historical society, described one classroom.

"Kindergartners have a very special room at Hinsdale's Monroe School, with a bridged goldfish pond and a little second-floor room where one child pretended to be a doctor," she wrote. "Every room had a piano and we sang each day."

The site surrounding the school looked significantly different as well. 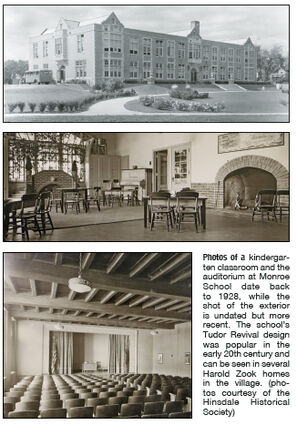 Photos of a kindergarten classroom and the auditorium at Monroe School date back to 1928, while the shot of the exterior is undated but more recent. The school's Tudor Revival design was popular in the early 20th century and can be seen in several Harold Zook homes in the village. (photos courtesy of the Hinsdale Historical Society)

"There were no trees on the grounds in the beginning, but later it became a custom for the sixth-graders to have a beautiful tree planting ceremony at the end of the year when they were leaving for junior high school," Loomis wrote. "The two graduating sixth-grade classes planted their tree and sang Joyce Kilmer's 'Trees' as they dedicated the tree."

Haarlow said he's amazed at how much the school and the village has grown and appreciates the sense of continuity the building offers. His children - second-grader Elsa and kindergarten twins Rhys and Maren, are the 10th, 11th and 12th Haarlows to attend Monroe.

"It's fun for me to think back of all the generations that have gone through there," he said.

And as the owner of a historic home dating back to 1906, he said he's happy to hear the Hinsdale Village Board is considering a Historic Overlay District that would offer preservation incentives to qualifying building owners.

Thorpe appreciates the opportunity to reminisce about her own teachers while supporting her daughters' teachers. She recalled one day last week when she was unloading sandwiches for Teacher Appreciation Week in the lounge, where she used to have music class with Mrs. Stansbury.

"It was a full circle moment for me for sure," she said. "It was really just a fantastic moment."