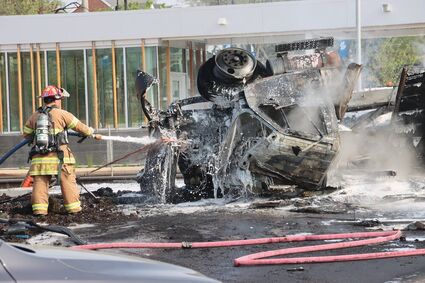 Hinsdale firefighters and police responded to assist Clarendon Hills personnel with a fatal accident involving a train and truck shortly after 8 a.m. Wednesday. According to reports on the scene, a box truck was unable to clear the tracks at Prospect Avenue and was struck by an inbound METRA commuter train. The truck was thrown about 25 feet east from the crossing and burst into flames. The fire was quickly extinguished. Reports indicated the truck driver and two passengers leapt from the vehicle seconds before impact. A passenger on the train reportedly was killed in the collision. Two passengers and two train crew members reportedly had minor injuries. All train traffic was halted Wednesday morning and afternoon as METRA officials waited for investigators from the National Transportation Safety Board to arrive to start their investigation. (Jim Slonoff photo)