New board plants seeds for the future 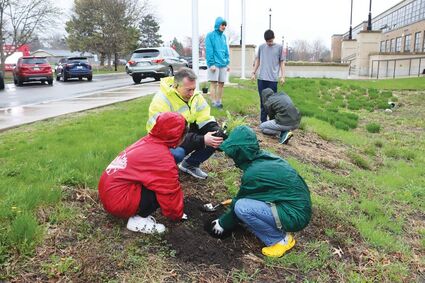 Bea Haverkos (left) and Erin Collins work with Mike Coughlin to plant perennials along the rain gardens in front of Hinsdale Central as part of Operation Pollination. Other participants included Aoife Stover (from left), Faaris Hanif, Holly Marcus and Shannon Stover. The event was led by the Rotary Club of Hinsdale's Executive Junior Board with help from the school's ecology club. (Jim Slonoff photos)

On a rainy April Friday, students at Hinsdale Central High School were digging holes to plant seeds and perennials near the rain gardens along 55th Street.

The hope is that this summer, the plants will help sustain monarch butterflies and other pollinators. The initiative is part of the Rotary Club of Hinsdale's Operation Pollination, and the planting was the inaugural event of the club's Executive Junior Board. They got some help from friends in the school's Ecology Club.

"Operation Pollination is a great thing to do for Earth Day," said Teagan Dunn, a Hinsdale Central sophomore who is the junior board's communications coordinator. "It is cool that we'll have a legacy and know this is part of our club."

"It brought me back to my days when I went to my uncle's ranch and dug stuff," he said.

Sophomore Kendall Chen, the junior board's events coordinator, enjoyed admiring the beauty of the plants entrusted to their hands.

"I honestly just like looking at the different plants that we had," she said. "Those purple flowers were really pretty."

The junior board was established in the fall to encourage more Hinsdale High School District 86 students to get involved with Rotary, said Rotarian Kevin Simpson, who is also director of security for the district.

"District 181 has always been a big supporter," Simpson said. "Not that District 86 hasn't been, but we've never tied into the student resources that are here.

"These kids have jumped on board, had all this energy, excitement," he added.

Dunn said she was prompted to join the junior board because of her family's history with Rotary. She thinks more students would feel the same if they knew about the junior board.

"I think there are a lot of people who have history with the Rotary Club of Hinsdale," she said. "They just don't know that we're here."

Gaby Valiz said she wanted to join the junior board after seeing how the Rotary supported local organizations during the pandemic.

"This would be exactly what I would want to be involved in to give back to Hinsdale and the surrounding communities," she said, adding that she appreciates the fact that Rotary is a national organization with a local impact.

"I have a lot of plans for next year," the future junior board president added.

The Central planting event is expected to be the first of a series of spring plantings to take place as part of Operation Pollination. The Rotary has reached out to the District 181 Foundation, The Community House, Hinsdale Seventh-day Adventist School, the Hinsdale Public Library and other local organizations to invite their participation.

After being launched last summer in conjunction with Rotary International's campaign, the local initiative has grown to include 12 member groups and several thousand local residents. More than 850 seeds packets were distributed last summer. Operation Pollination recognizes the importance of restoring and maintaining pollinator habitats across the country, according to its website.

"Through collaboration and outreach, an interconnected mosaic of pollinator habitats interspersed between public and private land will be developed to stabilize and/or increase populations of pollinator species throughout your project area," the site reads.

Pollinators include hummingbirds, bees, beetles, ants wasps and the Monarch butterfly. Monarch butterflies rely on nectar for energy for breeding and traveling during migration. Caterpillars need milkweeds to grow and develop. Unfortunately, milkweed has been lost due to land development, adverse land management, insecticide and herbicide use. It is among the majority of plants - more than 85 percent - that require an insect or animal assistance for pollination.

"There is no cost," he said. "The only requirement is the commitment to develop a local pollinator project."