Central teen enjoys roles in, in front of orchestra 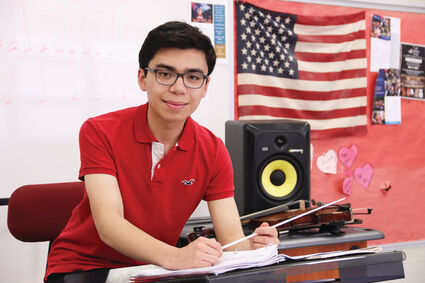 It takes a number of skills and talents to conduct an orchestra. The most important quality, according to Hinsdale Central High School junior Alex Olguin, is focus. There's no place for distraction when leading dozens of musicians in a performance.

"The conductor is the anchor of the orchestra," said Olguin, who began directing the Hinsdale Central orchestra ensembles as a sophomore, under the tutelage of orchestra director Serge Penksik. A cello player, Olguin said he now spends most of his time in front of the orchestra rather than in it.

"It's a toss up," Olguin said when asked which role he prefers. Olguin began playing piano at age 5 and took up cello in sixth grade.

It was during the COVID-19 pandemic that Olguin picked up the skills needed to arrange orchestral pieces. He spent his newfound free time learning to turn pieces like George Gershwin's "Rhapsody in Blue," originally written as a piano concerto, into a composition for the Hinsdale Central Philharmonic Orchestra. He's since arranged a dozen or more pieces for Central's philharmonic and symphonic orchestras.

Arranging a piece starts with listening, Olguin said. He then studies other scores of the piece he is arranging before beginning the job of putting his own spin on whatever classic or classical tune he's working on.

By the time he steps in front of the orchestra, baton in hand, he's intimately familiar with every note and nuance of the score he has created. He said it's exciting to hear what he has put on paper come to life in the hands of the orchestra's musicians.

"I've conducted both the symphony orchestra and the philharmonic orchestra," said Olguin, who describes his conducting style as somewhere between animated and reserved.

Olguin's job as assistant conductor puts him center stage, and his place in the cello section puts him on the stage, but he also enjoys working behind the stage.

"It's fun to work behind the scenes, running the lights, sound, construction," said Olguin, a member of the stage crew for the high school's music and stage productions.

Olguin arrives to school at 6:40 every morning to prepare the orchestra room for rehearsal. He sets up chairs and makes sure everything is ready for the orchestra winds' 7 a.m. practice, followed by the strings at 8 a.m. By preparing rehearsal and performance spaces, Olguin said he's learned a lot about acoustics and the unseen details that can elevate an experience for the audience.

Olguin will step on stage for the final performance of the school year as his fellow musicians perform his own arrangement of John Williams' "Across the Stars" at 7 p.m. Tuesday and Thursday, May 17 and 19. Olguin will conduct at least one of the performances.

With summer approaching, Olguin said he will soon begin arranging music in preparation for next year. His plans include a few excerpts from "The Nutcracker" for the orchestras' holiday performances.

Olguin said he's grateful for the support and opportunity given to him by Penksik. Whether or not he pursues music as a career, Olguin said music has and always will be an important part of his life, whether he's on stage, behind the stage or in front of it.