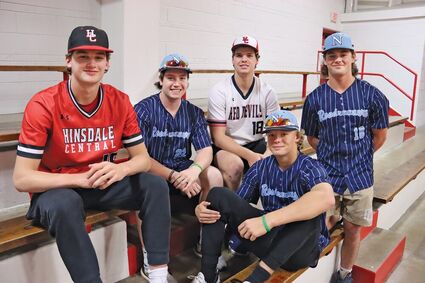 Ben Oosterbaan (clockwise from left), John Hughes, Luke Adams, Lucas Smith and Cooper Malamazian - all of whom were on the same travel team as kids - will continue their baseball careers at Division I schools. (Jim Slonoff photos)

Seven years ago Pat Hughes worked with Top Tier to put together a travel baseball team to give his son and other young athletes in the area a chance to play with their friends and be coached by their dads in a high-level program.

He said he knew even then that some of the boys had the potential to play baseball at the Division I level.

Six of his players already have committed, including two sophomores. They are Hinsdale Central senior Luke Adams, Central junior Ben Oosterbaan, Nazareth Academy junior Lucas Smith and Naz sophomores John Hughes and Cooper Malamazian. The sixth is junior Tristan Head, who moved to Florida last year. He will play at University of Virginia.

"For the ones that are currently committed, I knew that they would all be Division 1 players," Hughes said. "I could see them in the context of this larger travel world and how they fit in. There's at least two (more) that have an opportunity to commit and play higher level college baseball, maybe three."

Jim Donovan, a professional coach and trainer who worked with the team, said the boys' level of commitment and willingness to listen differentiated them from other players their age.

"There are lots of kids who at early ages will show flashes of greatness, so to speak, and many times those do not sustain, because usually when you're really good when you're very young, sometimes there is a lack of receptivity to coaching and development," Donovan said. "All of those guys, they just never showed any signs of that.

"They were always extremely coachable and dedicated to their craft," he continued. "They bought into that mindset that this takes time and it's not something that's an overnight process. You're constantly needing to work on the game and your presence in it."

Coach Jim Smith, Lucas' dad, said the players had a drive that was uncommon for kids their age.

"All of them took the responsibility very seriously," he said. "I know every single one of those kids, they put time, effort and work into it."

He witnessed that firsthand with his son.

"He just wanted to become a better ballplayer and he put the time in," he said. "He's gone out and gotten it himself. No one has given him anything."

Despite their talent, the boys kept their egos in check, Smith said.

"None of these kids ever got a big head and they were always good teammates," he said.

Ben's dad, David Oosterbaan, pointed to the positive examples set by everyone associated with the team.

"Coach Jim and Coach Pat taught the boys to compete with class and carry themselves as gentlemen on and off the field," he said. "Ben had two great role models in them, and the other boys on their team and their parents were a major part of their success."

Donovan's sons served as inspiration to the younger players as well. David Oosterbaan said he and Ben went to California in 2019 to watch Joe Donovan play as the starting catcher for the Michigan Wolverines.

"Ben's experience at those games, being with coach Jim and watching Joe compete, created in him even more love for the game and more drive to play baseball in college," David Oosterbaan said.

Donovan said Joe and his older brother, Charlie, had the same chance to rub elbows with older players who served as inspiration. Joe is now a catcher in the Cleveland Guardians organization, trying to make it to the big leagues.

"It has the potential to really light the fire in a player who has some aptitude and some desire to do it," Donovan said. "It's a really cool process. I feel so grateful that not only did my boys have that sort of relationship with my students, but that these younger students had an opportunity to do that with my boys. It was one of the most enjoyable parts of the process for me."

And when Charlie died in 2015, the fall after graduating from high school, his teammates were there for the Donovan family. 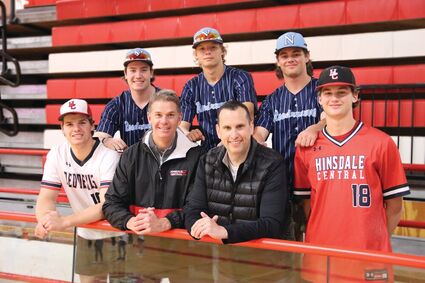 Along with other dads and a professional trainer, Pat Hughes (right) and Dan Adams coached the team, which included their sons, John (top left) and Luke (far left) along with Cooper Malamazian Lucas Smith and Ben Oosterbaan.

"Ben Oosterbaan and Lucas Smith and some of these guys were on a team that Charlie, Joe and I spent of lot of time working with out of Hinsdale. They were a big part of putting up ribbons on trees," Donovan said, recalling the special moment when he spotted them on his street.

He believes the positive environment and decision to always treat the boys with dignity, even after a loss, created a level of trust.

"You're able to create a bond that is lasting and meaningful," he said.

Pat Hughes said he is grateful to have had the opportunity to work with great friends coaching a group of boys who were great friends.

And he appreciates the chance to see them grow in their baseball careers.

"It's wonderful to be able to have even a tiny role, a small role, in a young person's development," he said. "It's a gift. It's a blessing."

And it's a gift that will keep on giving.

"My wife and I have already planned to be at as many baseball series and road trips as Luke will allow us, which we think will be all of them, which is pretty phenomenal," Dan Adams said.

Memories to last a lifetime

When these five friends are playing college ball and think back to their days on Pat Hughes’ travel team, one memory will stand out — traveling to Cooperstown to play some of the best teams in the country. Hughes was able to take two of his teams there during the four years he coached.

Here’s what he, other coaches and the players had to say about it:

“It’s a magical experience that a lot of kids around here have gotten to do. Being there and having the families there and my wife there and all the moms, it was a wonderful time.” — Pat Hughes

“Our little team from Hinsdale and the surrounding area getting to the final eight at that Cooperstown tournament was something that we didn’t expect but something we will never forget for sure.” — Jim Smith

“Getting to see a whole bunch of the country with just four guys and a smelly minivan was a pretty special way to spend a week.” — Dan Adams on he and his son carpooling with Pat and John Hughes

“The kids we played against definitely were not 12 years old and they slaughtered us in the fourth inning.” — Luke Adams on one 2 a.m. game against a team from Florida

“I remember how excited we were because we didn’t think we’d go that far. There were 114 teams there. To win that game was surreal.” — Cooper Malamazian on winning the game to get into the final eight

“That was a great trip — just the camaraderie, just being with them for a week straight in the bunks was fun.” — Lucas Smith

“We beat a lot of teams that we weren’t supposed to beat. We kept getting to stay longer and longer because we were winning.” — Ben Oosterbaan

“Cooperstown was just amazing. Being with all your friends and being able to make it that far and get top eight in the tournament. It was something I’ll never forget.” — John Hughes