Wind, rain, sun, buses and a ship - along with a dinosaur or two - made it a great evening to be a Red Devil at prom 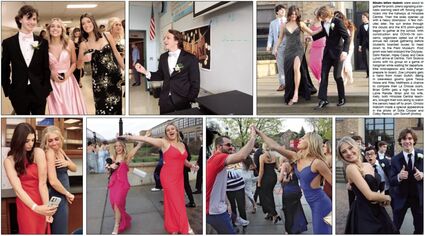 Minutes before students were about to gather for prom, sirens signaling a tornado warning went off, forcing organizers into the hallways at Hinsdale Central. Then the skies opened up with a heavy downpour. A few minutes later, the sun broke through the clouds and the 670 prom-goers began to gather at the school. With construction and COVID-19 concerns, organizers opted out of the annual red carpet gathering before students boarded buses to head down to the Field Museum. Post prom was held onboard the Odyssey. Sami Raslan, Haley Casey and Cece Lynch arrive at Central. Tom Skokna works with his group on a game of hangman while waiting for departure. Ellie Andrzejewski and Kate Ferren prepare to board. Zoe Limparis gets a hand from Aidan Dufort. Being in sleeveless gowns gave Tessa Howe and Riley Matthews a chance to compare their La Crosse scars. Brian Griffin gets a high five from Lanie Randle. Brian and his wife, Kelly, both Hinsdale Central teachers, brought their kids along to watch the seniors head off to prom. Christo Malcom made a special appearance in the photo of Sofia Cooper and Colby Revord. (Jim Slonoff photos)