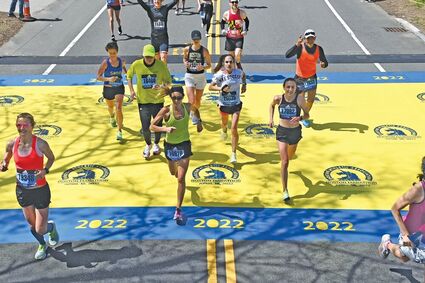 Alli Mason (center, white shirt) crosses the finish line at the 126th Boston Marathon on April 18. The Hinsdale mom is a Boston native but this was her first time running in the event after she just missed the qualifying time for the 2020 race, which the pandemic canceled.

Hinsdale's Alli Mason got new wireless earbuds to supply songs for her strides during her first Boston Marathon on April 18.

From the start, however, she found that much of her playlist was drowned out by the raucously supportive crowds along the 26.2 mile-route.

"You could not make the music loud enough," Mason said. "There was not one inch of the course where there not balloons and people shouting and cheering. It was nuts."

A Boston native, she was urged in 2019 by her brother, also a distance runner, to try to qualify for the event.

They posted strong times at an Erie, Pa., marathon but narrowly missed the cutoff. When the Boston Marathon returned from its COVID-19 disruption to full participation this spring, those previous times were still good - and now good enough.

"I think I blew his eardrums," Mason said of her brother's phone call with the qualification news.

In addition to training with Chicago Endurance Sports, she also worked with a private coach in the run-up to Boston.

"I ran 50 to 60 miles a week, alternating between long runs and speed training," Mason said. "It kind of made me feel like I was in high school again."

As the marathon approached, her daughter's first-grade class gave Mason a card with handwritten messages of support.

"It was so cute, it brought tears to me," said the mom of four.

The entire Mason clan made the trip east, enjoying an Easter Sunday celebration with extended family, who would then all turn out for Monday's race. Mason noted marathon volunteers' stellar hospitality, including one who handed out her personal suntan lotion to ensure runners had protection.

Her time of 3:31.16 qualified her for next year, and the plane ride home was full of fellow proud participants.

"Total strangers are your best friends. We were high-fiving each other," she said. "Just as a runner, it's literally what makes the sport fun."

Running has been and on-an-off pursuit for Hinsdale's Martin Knight-Jones for the past two decades. The London native, who moved with his family to the village last July, has competed in numerous marathons in the U.S. and Europe, including the 2019 Boston Marathon.

To qualify for the 2022 edition, he ran a 3:19 at a race in St. Charles, but he wasn't confident that would clear the threshold.

"That would not normally get you into Boston," Knight-Jones said of the time. "But they had fewer entries than normal this year and I was lucky to get a place."

That meant a winter regimen of running, knowing the challenges Boston presents.

"It's a really tough course. It has a lot of ups and downs," he remarked.

"It was really perfect running weather," he said.

"The crowds were great," Knight-Jones said. "When you reach the finish line, it's just this incredible noise. You feel like there are 20,000 people cheering for you. The last mile I couldn't feel my legs, but the crowd was pushing me along."

He achieved his goal of beating his St. Charles time, clocking in at 3:15:32, which also bested his 2019 Boston time.

"I actually felt really happy with my time, and I felt completely exhausted," Knight-Jones said. "I felt like I'd given 99 percent."

His wife Claudine and two teenage kids weren't able to make the trip but were his biggest support system.

"We're extremely proud of him," she said.

He's looking forward to running his first Chicago Marathon this fall and possibly his third Boston next spring.

"If I'm lucky enough to qualify again, I will definitely go," Knight-Jones said.

Founded in 1897, it is the country's oldest marathon. But it didn't permit female entrants until 1972.

"It was the 50th anniversary of allowing women to the run the marathon, which I thought was really cool," she said, citing a special ceremony to mark the occasion.

Hummer took part in the virtual Boston Marathon in 2020 and was among the 15,000 entries in a modified field last fall. The marathon usually welcomes 30,000 runners.

She said the course requires a premeditated plan.

"You really have to strategize and be smart and not go out too fast," Hummer said. "It's downhill the first 13 miles and you hit those hills just when you're (hitting your stride)."

That includes the notorious Heartbreak Hill. 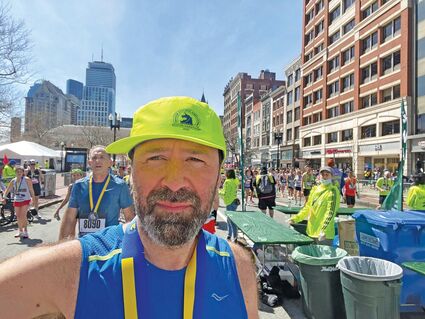 Hinsdale's Martin Knight-Jones ran in his second Boston Marathon last week. He said his stamina was waning toward the end of the 26.2-mile hilly course but that large encouraging crowds gave him the push he needed to finish. "The people cheering carried me through that last mile," Knight-Jones said.

Hummer signed up for her first marathon in 2017 to help raise money for breast cancer research after her mother-in-law was diagnosed with the disease.

She's part of the Chicago Area Runners Association (CARA) in which members bond through mutual support and accountability.

"You travel together and you share so many miles together," Hummer said. "We run at Waterfall Glen in the summer and Morton Arboretum in the winter."

Without that network, she doesn't see herself waking up to run in sub-zero wind chills in January.

"It's great to train with a group. Training by yourself is brutal," she said. "The camaraderie and the accountability makes it fun."

She was pleased with her time of 3:42.49 but admitted that she was mindful of her next stop: the Big Sur Marathon in California the following week.

"I knew I was running (Big Sur) so I was trying to hold back and be conservative," she said. "It's Boston to Bug Sur: two marathons, two coasts, six days."